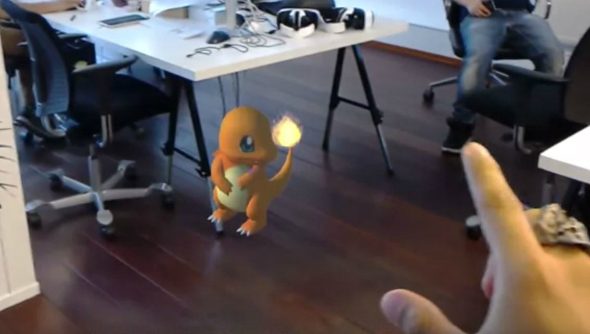 If you, like us, are bound to our PCs day in day out and lack the physical strength to drag our rigs out into the burning summer sun to join the mobile Pokémon GO craze, then maybe there’s a shady solution on the horizon.

CapitolaVR, a dev team specialising in virtual reality (strangely enough), have put together a demo for Microsoft’s sort-of-VR-headset HoloLens to show what Pokémon GO may look like on a real platform.

Of course, of the headsets available to developers at the moment, HoloLens’s augmented reality overlay on the real world is the closest thing to what Niantic’s mobile app does for the Pokémon catching game. But obviously it’s difficult to walk several kilometres, exploring the world, while plugged in.

“For now the Pokémon are randomly generated within a mapped environment,” CapitolaVR’s head of digital David Robustelli told UploadVR. “We are now focusing on how to use different gestures for specific interactions. For example, like opening your inventory or activating your map and zooming in and tilting your map.”

Of course, this is entirely off the books. Robustelli says the company has no discussions with Niantic, the Google-spin-off startup which created GO along with The Pokémon Company, part of Nintendo. As a result, it’s extremely unlikely you’ll see any form of release for this, but it is a nice demo of just what the HoloLens can do, and what we’re missing out on in our LED-laden fortress of ATX tower cases and whatever other cliché people imagine PC gamers to live in.

Here’s footage of the demo below: