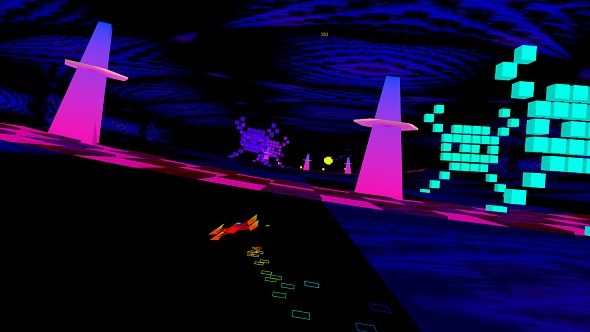 Ever wanted to play a game that’s so good it resulted in men in black coming to research it just because of how well it managed to get people addicted? Well, such a game doesn’t exist, but Polybius is a game based upon that legend, and it’s coming to PC.

For more of the best indie games on PC, check out the list of our favourites.

Originally on PS4, and made to work with the PSVR, Polybius is described as a “trance-shooter”, and is being developed by Llamasoft. The announcement came via Twitter, as Jeff Minter of Llamasoft showed himself off with an Oculus Rift, playing the game at his absolute mess of a desk.

The game works without VR, as it did on PS4, according to a followup tweet, and is currently being developed with Oculus Rift as the focus. Minter did say, earlier today, that Polybius would “likely end up supporting [Vive]” too, in a separate tweet. Announcements are best done via tweets now, it seems.

On PS4, Polybius received great reviews from a number of places, and so should be right at home in the VR library of Steam in the future. There’s no release date set quite yet, but you can spend the time waiting reading more about the urban legend that inspired Polybius on the PlayStation Blog. It’s a wild ride.