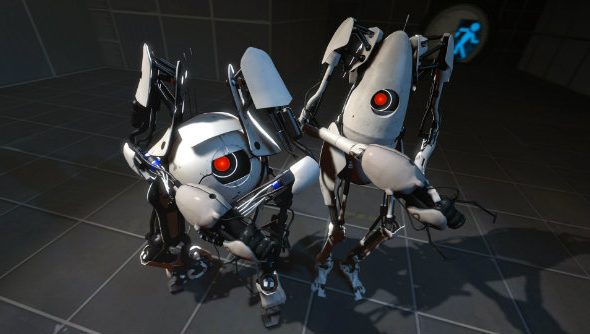 At next week’s Games Developers Conference (GDC) Valve will be showing off a virtual reality demonstration that returns players to Aperture Science.

That’s a week away, but you can play the through our list of PC’s best games right now.

It’s a”compilation of new VR experiments” set in Aperture Laboratories, according to a Valve press release. It sounds like you’ll be dicking about doing – or being the lab rat in – a bunch of VR experiments designed to show off the HTC Vive’s room-scale features.

This isn’t the first time Valve have made Portal the backdrop of a VR release, as recently The SteamVR Performace Test plonked players in that very same world. People even found Half-Life 3 and Left 4 Dead 3 hints within.

The Lab will be on display at GDC in San Francisco, California, between March 14-18.When The Lab launches on Steam later this spring, it will be available free of charge.

The HTC Vive itself is currently available to pre-order for $799 USD, and the first batch will be arriving on April 5, 2016.