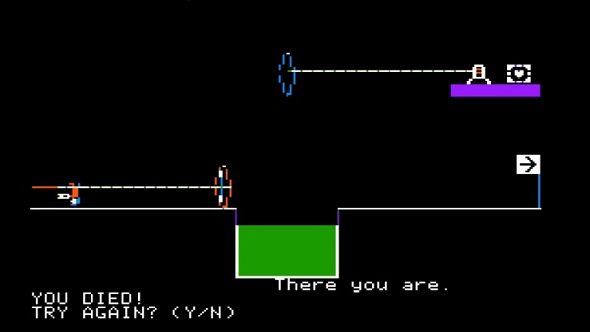 Do not adjust your monitors, you are reading that correctly. As part of his on-going ‘Applesoft Anachronism Theater’ series on YouTube, assistant professor of Electrical and Computer Engineering at the University of Maine Vince Weaver, has successfully coded a version of the original Portal to run on an Apple II computer.

If high fidelity is what you’re after, check out our top PC games.

Using the Applesoft programming language, Weaver has created a sort of abridged version of Valve’s incredibly popular puzzle platformer, complete with the ending fight with GLaDOS and a low-fi version of the song ‘Still Alive’ in the credits. The version is fully playable on an Apple II or via an in-browser or downloadable emulator for the ‘80s era desktop.

If you want to give this version of Portal a go for yourself, you can download it via Weaver’s website should you wish to travel back to an alternate past where Valve was a dedicated developer of games for Apple. This is also not the first modern PC game Weaver has ‘demastered’ for the Apple II. He previously made a version of Squad’s Kerbal Space Program for the Apple II, which is also fully playable and available to download from his site.

It’s commonplace to see people trying to get games like Doom running on a calculator but I’ve never seen someone actually go out of their way to redo a game for a system like the Apple II. I wonder what game Weaver will find next on his travels through time.