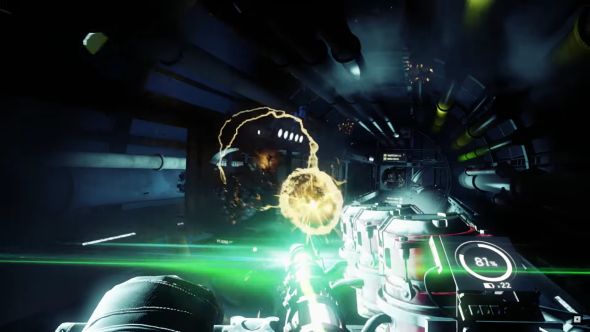 Arkane’s sci-fi immersive sim Prey has got a release date: May 5. In case you don’t know what it’s about – what, have you been living on a deserted space station? – a brand new gameplay trailer is here to show you.

For all the latest on Arkane’s new immersive sim, here’s everything we know about Prey.

The trailer gives a further taste of the clever emergent gameplay with which Arkane made their name in the Dishonored series. The GLOO cannon’s many applications are on show once again, with the player using it to build staircases and plug flaming gas leaks. We also get another glimpse of the shapeshifting aliens and the nasty, eye-gouging device you’ll use to steal their powers.

Publishers Bethesda took the chance to announce a couple of pre-order bonuses for those who are already sold on life as a coffee mug. If you pre-order, you’ll get the cosmonaut shotgun pack, which features protagonist Morgan Yu’s family heirloom shotgun and various tools to fight the sneaky aliens. These include two medikits, a starter kit of crafting supplies, three Neuromods you can spend on new abilities, and a unique upgrade to help you conserve resources.

Prey is a sci-fi shooter with some ‘immersive sim’ elements and a dash of horror. After an experiment modifying yourself with the DNA of those aforementioned shapeshifting aliens – always a good idea – you awake to find your space station deserted and overrun by said aliens. You then get to use your new powers and a bunch of inventive weapons to Sort Things Out.