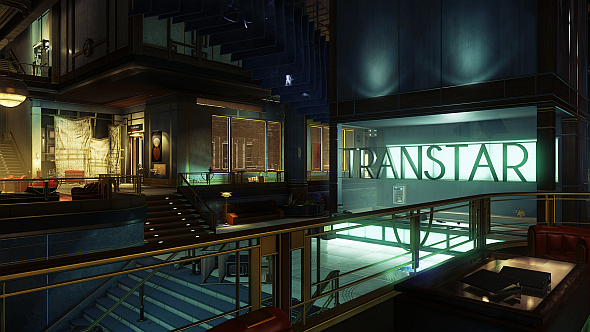 Prey developers Arkane have released a video exploring Talos I, the space station suffering an unfortunate case of alien invasion in their latest immersive sim.

Check out a few other amazing sandboxes in the best sandbox games on PC.

Talos I is a surprisingly diverse place for a space station. Lead systems designer Seth Shain describes it as “an amazing sandbox. We have a huge diversity of locations, from things that feel like corporate offices, dormitories, industrial areas, and then you can go outside the station and float around in zero G.”

Lead designer Ricardo Bare says the station is “built in layers, kind of like an onion”, with the outer levels all about TranStar, the corporation that owns it, showing off to their guests. The camera swoops through gorgeous wood-pannelled theatres, atriums with marble and gold statues, art deco restaurants, and even fitness suites with swimming pools.

But in a space station, as lead visual designer Manu Petit explains, square footage is the ultimate luxury: and there’s a lovely shot of a clifftop villa contained in a glass dome, the stars beyond. Perhaps an executive’s mansion? A VIP hotel?

But of course, “it’s not all the shiny veneer of the corporation,” says lead designer Ricardo Bare. “The space station is built in layers, kind of like an onion. And the closer to the centre you go, the more you get to the actual reason why the space station is there. You get to the laboratories and the secret stuff they don’t want everyone to know about.” In the depths of the space station, things are more claustrophobic and utilitarian, with leaking pipes and faulty scientific equipment.