This is The Gunsmiths, a PCGamesN series about videogames’ favourite interaction: shooting people, aliens, zombies, and other nasties directly in the face. There is no shortage of great games where gunplay is the main draw, so we wanted to dig down into these games’ inner workings, breaking them apart at a tool bench and seeing the components spread out across its surface. For our fifth feature in the series, it’s the methodical tactics and inky splats of Prey’s alien slotting.

You only need to look at  Dishonored and Dark Messiah to know that Arkane are proficient with the sword. But, like Prey’s space-based setting, guns were uncharted territory for the studio when they started work on their first-person shooter.

Arkane are the studio to hire if you want a game with clever weapons and tools that work in interesting ways. However, if you want to make firearms feel good you bring in id Software, and that is exactly what Arkane did. According to lead designer Ricardo Bare, id’s involvement led to a huge leap in quality for Prey’s traditional weaponry, particularly its angry shotgun, as they helped with tips on weapon feel and enemy impacts.

Don’t miss episode 4 of The Gunsmiths: the bullet ballet of Max Payne 2.

“Some of it is on the player side. So when you fire the shotgun, how much do you pop the camera up and precisely when do you pop the camera up?,” Bare asks. “Then some of it is on the AI side – at least half of what a weapon feels like is [about] what the AI does when you make contact with them. At one point – for our flying enemies – we turned on a physics pushback, so if you hit them with a shotgun it will kick them back through the world – it feels like the shot has some weight to it.” 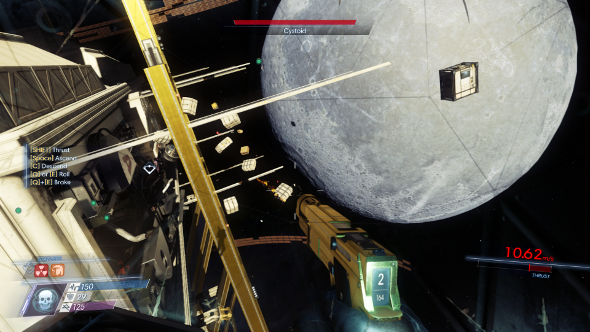 To add more power to these hits, unaware enemies clobbered with a charged wrench or caught with an unexpected shotgun blast go flailing across the art-deco floors of the space station Talos 1. Essentially, high damage numbers bypass animations and trigger a ragdoll state. This sense of physicality is not just limited to the NPCs in Arkane’s games, however – their worlds are always fully interactive, but that comes at a cost.

“Even when you’re just exploring, it makes the world feel more real if you can actually jump up on a desk and knock a bottle over, instead of it having no collision and you pass right through it,” Bare explains. “Or you throw a grenade into the room and the chairs, boxes, and books all go flying instead of being glued to the ground. There’s a tradeoff, of course. [Physical objects] are resource-intensive, so that means we can’t have as many AI or as big a space.”

Instead of giving us huge but barren worlds, Arkane really think about the contents and architecture of each room in their games, making sure they are laid out to take advantage of your combat and non-combat abilities. Like a mug that doubles up as a face-hugging alien, everything must also have multiple uses, and every prop must make sense in the context of the world – even down to the baseball gloves. These self-imposed rules are what make Prey’s weapons so imaginative.

“We have a couple of traditional weapons like the pistol and the shotgun, but the space station is not a military installation, so it didn’t make sense to have rocket launchers, giant machine guns, and things like that,” Bare tells me. “Early on, we prototyped a lot of weapons that were multipurpose and could be rationalised as ‘hey, these things are part of some scientific project that’s going on’. So we were thinking about the scientists and how they were experimenting on the aliens, and how they would need a tool to quickly subdue the aliens without killing them.” 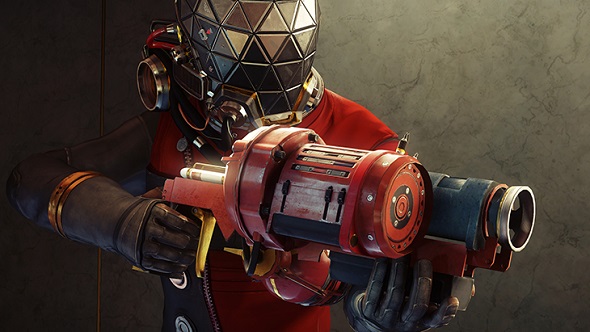 This is how Prey’s GLOO Cannon was born. Arkane were looking at non-lethal weapons in the real world, which led to them seeing some modern attempts – some of which have gone horribly wrong – at creating riot foam. Just like its real-life counterparts, the GLOO Cannon also went through some unsuccessful prototypes.

“One version shot out one small pellet at a time and exploded like an air bag, instead of the stream we have now,” Bare recalls. “We had one that was like a firehose – a continual wet stream. Some versions were performant and some weren’t. You have different constraints, so the version we ended up with was the best intersection of: performs well enough to ship and is the most fun. The trickiest was on the AI and animation side – figuring out how the player knows the AI is fully glued versus partially glued. So we have this analogue – if he’s 50% we’ll slow his animation down by some other percentage, then when they’re fully glued the glue needs to transition from this colour to this colour, to let the player know it has hardened.”

Another unconventional weapon, the Huntress Boltcaster, started as a joke. On Prey’s Talos 1, the scientists can 3D print weapons and gadgets by popping recycling materials into a machine called a fabricator. What would a load of science geeks 3D print if left alone in space? Nerf guns, of course. “But, even though it seems silly and innocuous on the surface, we actually have a lot of game systems that interact with a nerf dart,” Bare explains. “You can use it to trigger mines, there are aliens that are attracted to motion, you can trigger touchscreens from far away, you can push a button from far away – so actually it turned out to be this secret tool that a lot of players found very useful.”

There is already a power that allows players to control machines from a distance, but the boltcaster provided a fun, shooty way to interact from afar for those who prefer to play with tools. “A lot of the time, what ends up happening at Arkane is we have a bunch of things that we throw into the soup and then we either go ‘this thing doesn’t have many interesting interactions’ and it gets cut, or we look at it and we go, ‘this would be very cool and worth it if we stitched it into the following game systems’,” Bare says. “That’s what happened with the boltcaster.” 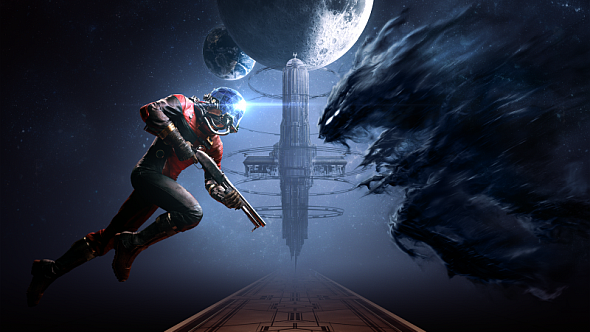 Everything has to be useful or it gets refined until it is. If it never works then it gets cut. That is how the Q-beam was created as well. This experimental cannon is the most powerful weapon in the game, and it was crafted solely to function as a tool for those playing through the game without powers could use to take down the big enemies. “Fictionally, the idea was that they were playing around with the military bots, upgrading their combat systems,” Bare says of the weapon’s justification. “A lot of [the feeling of power] comes from audio. A lot of weapons are the classic hold the trigger, keep it depressed, and the power ramps up, like the classic chaingun from games. But a lot of it has to do with the audio ramping up, then, at the end, the AI exploding.”

The Q-beam didn’t always look like it currently does, however. At one point during development you could fire it around corners. Unfortunately, you were just as likely to fire it at yourself. “The very first iteration of it was a laser that bounce off any surface,” Bare remembers. “It would just bounce all over the place. It was kinda fun, but it was a little hard to use and a little unpredictable. It was predictable if you figure out the angles, but in the middle of combat it wasn’t super useful. It would bounce off metal, so if you shot a military bot head-on it would come right back, then the military bots are already lasering you, so you’re double-lasered.”

This is how Arkane work. They clobber together their tools from various components, break them down into manageable chunks, and swallow up what does not work – much like the Recycler Charge, a grenade that breaks down everything near it into materials that you can use to create ammo, health, weapons, and more. It is one of the most visually satisfying weapons in a game and, bizarrely, likely would not exist without Marvel.

“The Recycler Charge was inspired by Thor: Dark World – there’s this weird device that eats holes out of things,” Bare says. “Simultaneously, we were thinking about the crafting system and how we have these recycler machines and the fabricators – we took this black hole idea and made it spit out the same components as the recycler. That one took a long time to get right because of the physics of sucking things into the centre and making sure things didn’t go flying out of the map. All the credit goes to our physics programmer, Wendy White.” 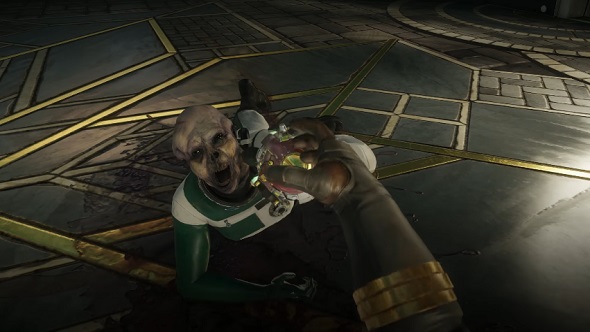 All these tools work towards one goal: to make every fight feel tactical. Every creature in the game has clear strategies they will use against you and that you need to learn and adapt to. “We wanted it to be very clear, in a Dark Souls-like way, if you walk into this room and walk in blindly and start firing your pistol, this guy is going to destroy you in three seconds,” Bare explains. “So then you would stop and go ‘OK, let me try something else’.”

To this end, every enemy has a function and a specific behaviour: Mimics disguise themselves as props to keep you on edge; the Poltergeist stalks you and can manipulate gravity and physical objects; the Telepath can control station survivors; and the Nightmare doggedly hunts you down, scouring the station more aggressively if you load up on power-giving Neuromods.

“We wanted to make sure each AI we had changed the way you interacted with it,” Bare explains. “With the Nightmare, we wanted to get across the idea that the Typhon aren’t just killing everyone on the station, they specifically have a problem with you. That gave birth to the Nightmare’s ability to track you through the station. We didn’t want to be like ‘there are three points in the game where you have a scripted big boss fight’ – we wanted to make it completely systemic. 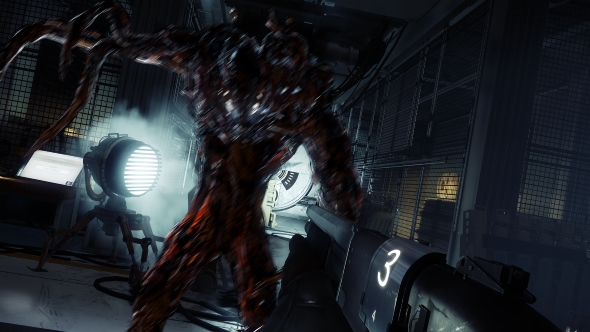 Looking back on the game now, one thing Arkane would improve is the in-game messaging around enemy strengths and weaknesses. They would make it more readable, so every player can really take advantage of its tactical, thoughtful combat.

“It’s not as accessible as it could be,” Bare explains. “If you really want to know how to defeat the Telepath, for instance, you have to scan them with the psychoscope, which tells you ‘this guy, all of his amazing powers that are destroying you can be shut down by a psychic attack’. But it’s difficult and I think we could have done a better job of messaging that to our players.”

So the next time you are creeping through Talos 1, terrified of everything lest it turn into an inky monster, throwing component-spitting black holes and firing off nerf darts at computer displays, spare a thought for all the things that make it work – show some appreciation for the gunsmiths at Arkane (and id).