Last weekend’s annual Eve Vegas event yielded a host of exciting Eve related reveals. This, it seems, is a result of everyone wanting in on the ginormous space opera MMO in 2018. It’s about time, given that the maverick Icelandic studio behind it all, CCP Games, now attracts quarter of a million PC gamers worldwide to its cosmic experience.

The first product of this CCP dogpile is its long-awaited Project Nova – a crisp, crunchy, tactics-based FPS set within the sprawling Eve universe. The logic is clear: market to your existing fanbase, unlock the potential hidden within your existing intellectual property, grow your brand. Makes sense, right? Well, kinda.

Among other barriers, CCP has its own history to contend with first – this is the second time it’s tried to venture into FPS territory. The first attempt was 2013’s Dust 514 for the PlayStation 3. Offline since spring 2016, that game was thrillingly ambitious but also proved to be a critical dud. Let’s not call it a mistake, though; critiquing ambition is a dangerous road to travel, and Dust 514 certainly had its fans.

This time round CCP is trying a different approach. On the recommendation of Paul Meegan, head of product development at Epic Games, CCP has brought in Nottingham-based studio Sumo Digital. Not only will the studio’s outsider’s perspective help, Sumo Digital is also an expert in crafting a successful FPS – the team has experience working on both GoldenEye and Call Of Duty. 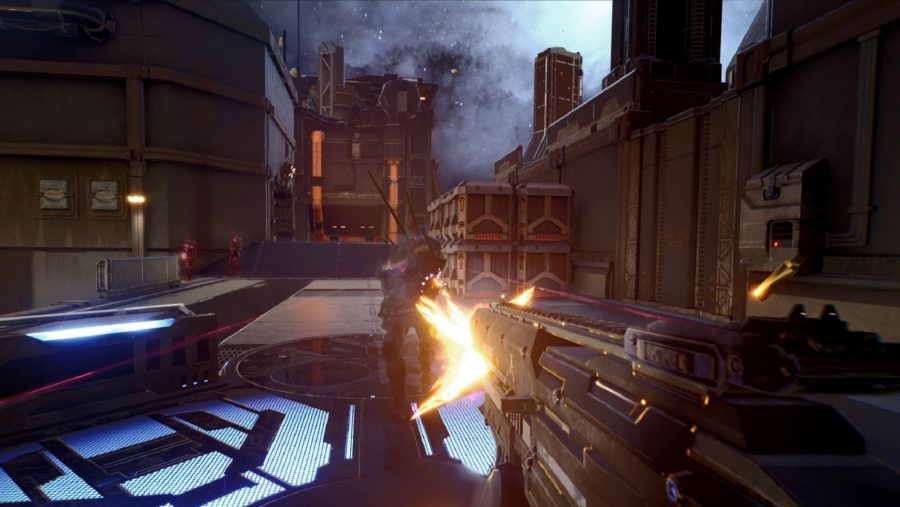 “Our brief was based on three pillars,” Sumo Digital’s Paul Wright, lead designer on Project Nova, tells me. “Gunplay was very high up the agenda. Second was the creation of a deep progression system, so players can get in there and evolve. And then there was high replayability.

I’m making the game for myself. That’s how things get done at CCP. We’re an indie developer at heart

“I think the area we’ve most succeeded in is the PvE mode, which is akin to a domination game, but the AI of the opposition is procedural. It’s very advanced. We give it certain instructions, but we don’t know what it’s going to do every time, so you have to change your tactics on the fly every time you play. We think that covers all of the pillars, but especially the replayability. There’s no mastery.”

This rings true in the hour I spend with Project Nova, playing the PvE mode – which bears shades of tower defence – as the opposition is wily and unpredictable. The gunplay is really rewarding, too, comparable to Halo more than anything – so bravo to the developers on that.

You play as one of Dust 514’s elite clone soldiers in Project Nova, engaged in a conflict against the Nation of Sansha – which will be familiar to most Eve Online players. These sleeping bodies are grotesquely entombed in insect-like power armour. Fun fact: the team used the death masks of deceased Victorian children as a starting point when creating the Nation, which is something to ponder when you’re having a quick game at 3am. Better yet, when you shoot them, their limp bodies float into space, which is both extremely cool and a further means to creep you out.

Meanwhile, your personal story is revealed to you through flashes of cognitive stirring – echoes of who you were, diluted by the rewriting of hundreds of replica versions of prior you layered on top. That said, I’m surprised and saddened to hear that none of this storytelling has any bearing on the wider Eve universe.

“Ultimately, we didn’t make Nova for Eve players,” the game’s director Snorri Árnason tells me. “We’ve definitely decided to make the universe in which the game exists authentic to Eve players. But it’s like Star Wars: they don’t violate the rules of their IP, they branch out in all sorts of directions, which is what we want to do with Eve. I think there will be Eve players who want to play it. It’s a very committed fanbase. But, ultimately, I’m making the game for myself. That’s how things get done at CCP. We’re an indie developer at heart.” 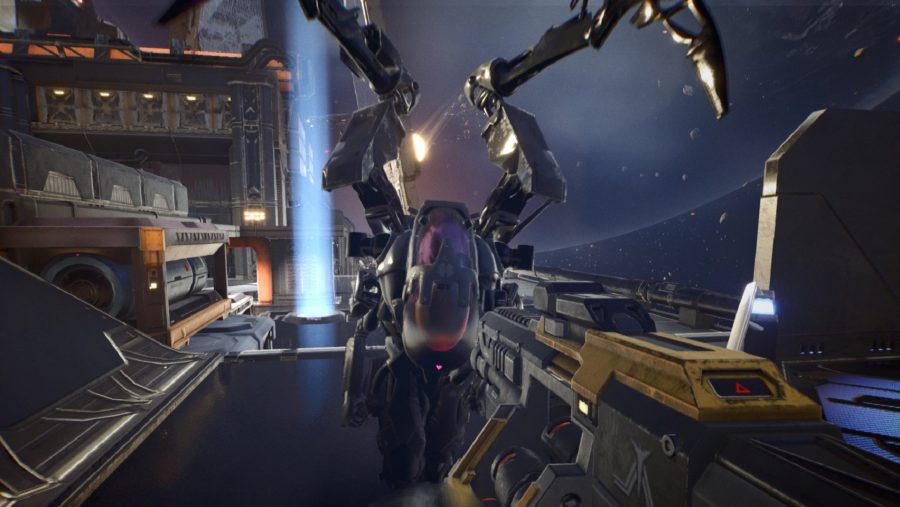 As anyone who has come in contact with Eve before will know, CCP isn’t a studio that follows any previously ploughed furrow. Its team spa with cage fighters for charity. Some of them make up CCP in-house pop group Permaband – mark your diaries as they turn ten next year. And, perhaps most refreshingly of all, they make videogames based on hunches rather than market research.

“I think the zeitgeist is important to consider when it comes to games,” Árnason says. “Right now, it’s The Hunger Games thing, battle royale. But I think there’s been a craving for a space simulator-FPS-crossover for a while now, and that’s what we’re pitching for here. Star Citizen is trying to do it. There’s No Man’s Sky. And I don’t want my games to reset. I don’t want Eve 2 or Eve 3. I want my character and I want that character to be someone I can play as for ten years or more. That’s something we’ve made sure you can do in Project Nova.”

There’s fun to be had in experimenting with the different classes in Project Nova due to the distinct abilities each of them have. Snipers can hover, meaning you can pick off an enemy from right above them. The Assault class has a long, ground-hugging slide that you can use to skid away from problems - or to arrive suddenly in conflicts. And Logistics - essentially grunts - are beefier than other classes, but slower too. They do have a grenade launcher, though, so fair’s fair.

That free spirit is something to be praised, no doubt. But, strangely, the one place it doesn’t feel present is within Project Nova. Dust 514 was intrinsically woven to the Eve Online mothership, as player actions in one game theoretically had an impact on political, economic, and environmental factors in the other, thereby proving intimidating to newcomers to the franchise. My fear is that Project Nova goes too far in the opposite direction in an attempt to be more welcoming to fresh faces. It’s perhaps not Eve enough. It’s an Eve game in name and aesthetic, sure, but apparently not in vision.

At least CCP has learned the most important lesson from Dust 514, though: the importance of releasing a spin-off game on a format that Eve Online players will definitely own.

“Many people, and I’m naming no names, believe that Dust 514 should have been on PC, not on PlayStation,” Árnason says. “Obviously it was a strategic diversification for us to do that. I’m definitely happy for us to be back within our natural home of PC now. I’m an FPS fan and I believe that PC is the natural environment for FPS. There’s 80 million FPS players on PC. I think a console is a sub-par system [for shooters]. And, of course, this is where the Eve community is.” 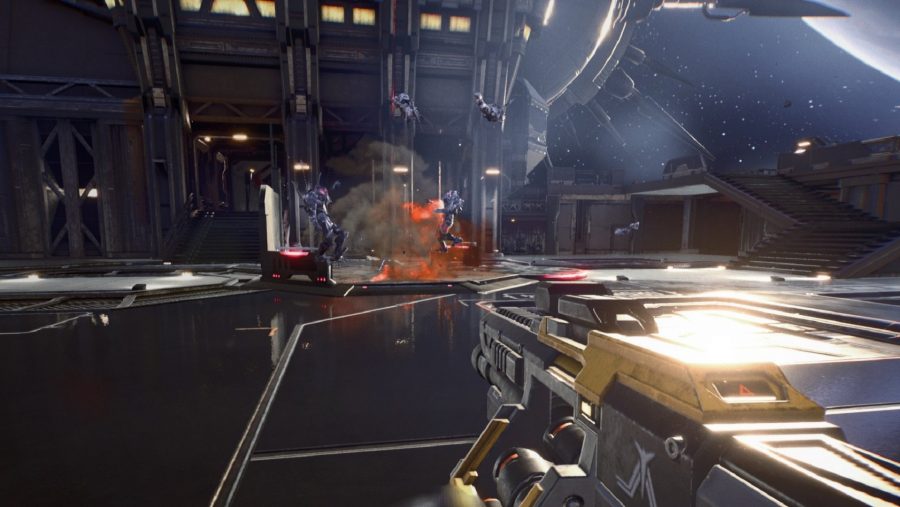 How successful Project Nova will be in pulling players over from Eve Online will be a story that unravels once the alpha arrives. What it hinges on is whether people will be drawn to a game that is built by an apparently more circumspect CCP – not the maverick it’s known for being.

Dust 514 was too ambitious. It was supposed to have tied in with Eve Online, letting soldiers in one game battle with ships in another. It didn’t work, but it was unarguably a brilliant idea. Project Nova doesn’t have that weight of innovation behind it at the moment, but what is there, at least, is an entertaining shooter that has every chance of attracting more players to the Eve universe. That’s hardly a bad position to start from.