SpaceX just launched a Tesla into space using the world’s most powerful rocket, but nevermind all that, Thermaltake just created the world’s first voice-activated RGB digital power supply, and FSP launched the world’s only liquid-cooler PSU. One small step for man…

Speaking of cooling… here are the best liquid coolers around.

For the most part, a PSU is a fairly innocuous brick that sits mostly hidden within your case and supplies your electrically-demanding components with all the juice they require to function. Thermaltake would beg to differ, however, and their Toughpower iRGB PLUS Digital power supply is testament to that mantra thanks to some new app integrations.

This RGB-laden PSU allows for the user to ask various voice commands, such as Ripple, Normal, RGB Spectrum, and Blink within the Thermaltake DPS app, which will subsequently communicate with your PSU and change the lighting accordingly. Did I mention the app utilises A.I. too? Of course it does! Somehow… I’ll have to get back to you on exactly how.

Thermaltake reckon this app support will be a hit among miners due to its integrated management controls and monitoring. When initial costs and return on investment are so key to the profitability of mining rigs, and handfuls of other devices are already available to get this job done on the cheap, I’m not so convinced miners will be utilising ‘RGB Plus’ PSUs in the first place. 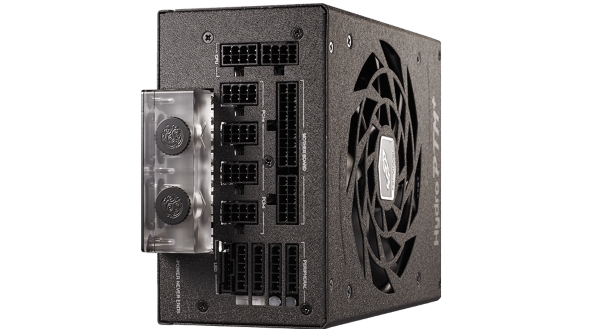 That’s not the only world-first in PSU news today, however. FSP have released their Hydro PTM+ RGB PSU. This unique PSU is ‘the world’s only liquid cooled ATX PSU’, and allows you to boost it’s rated output from 1200W to 1400W by utilising the liquid cooling block attached onto the PSU’s PCB. There’s probably a reason why it’s the world’s only PSU to deliberately pump liquid through its electric insides, I’ll leave you to figure out what that might be.

This Bitspower collaboration project even has a limited edition run of 500 units, packed with sleeved cables in black and red and a Bitspower custom loop pump and radiator combo. It will retail for an MSRP of $699.

The beauty of PC building is that you are free to build with the components and features that you deem worthy, but I’m struggling to see the justification for these products in any real-life applications whatsoever. At least Thermaltake’s app integration is essentially a free upgrade for current Toughpower iRGB owners.

Personally, a power supply is better neither seen nor heard, which they often already do a pretty good job of so far – ensure a high build quality with your product for a reasonable price and you are onto a winner. However much I oddly appreciate these weighty components, they are not the superstar part of a PC build and never will be – no matter how hard you try.