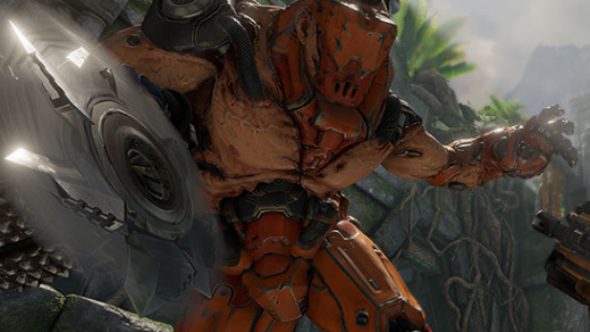 Outside of its namesake, one of the oddest things about Quake Champions is it’s not just an id game. Despite their massive success with Doom and the expertise of the Quake Live team, id brought in Saber Interactive – a relatively small studio who have worked on various console titles – to help out. Part of that is down to technology, with Saber not sticking to just id’s own engine to make the game.

“One of the things that we wanted to do first in the game is capture that true Quake feeling – that’s the feel of the motion – so we took id tech for that,” says Tim Willits, creative director at id, “but then for the rendering and some of the other elements that pack around that, that’s Saber tech. We felt that it was the best position for us, given what the experience of the team is, and the guys that work on it at id.”

It was also a decision of pure practicality – “we’ve been working on this longer than id tech 6 [has been finished]” he explains. “But we feel for the audience we’re going for, and what we want to accomplish, this was the best path forward.”

As for Saber, id found their ideas for the franchise sat precisely with theirs. “So a while ago, the Quake Live team was looking at expanding Quake Live,” explains Willits, “and we had thought about adding champions and this type of thing. But then we looked at what was happening with Doom, the success of how that game was shaped, even before it was shipped.

“We started to look [at] taking this idea of champions and expanding it to an entire game. So we talked to a number of different developers and the great thing about Saber is when they talked to us about what they wanted to do – if they had this franchise what they would do – it was really close. It was shockingly similar to what we wanted. So it really was a perfect fit.”

Plus, he says, it’s really worked out. “They’ve been great to work with, you know it’s a true co-development, we have a group of guys that are working on it [too]. The pro players who played it at Quakecon were like ‘This is Quake, we like it, go!’ So I feel really happy about how it’s shaping up.”