There are modders who are still creating new maps for Quake despite it being 21 years old. The latest of which is one of the largest ever made – it’s significantly larger than anything the original game could cope with.

It’s not just Quake, check out our list of old games that still hold up!

Called the The Forgotten Sepulcher, it is loosely based on the old Quake classic map E1M3: The Necropolis. It’s built by two Quake level designers, Simon “Sock” O’Callaghan and Henrik “Giftmacher” Oresten, and is certainly the most intricate Quake map we’ve ever seen.

Whereas the original E1M3 used only around 1,000 brushes (Quake’s own version of individual blocks used to build every map), this update uses over 60,000. It also ups the ante, from 65 monsters and three secrets, to hundreds of monsters and 50 secrets. O’Callaghan even had to release his own versions of the Quakespasm and Quakespike engines to make this map possible, all as a part of Arcane Dimensions, his attempt at creating a campaign and mod for Quake.

O’Callaghan shows off his intricate map in a seven-minute video, which you can watch above, allowing you to see the scale of the map before going through the process of downloading it.

Backed by the sound of Camille Saint-Saëns’ “Danse Macabre,” the video’s real dance of death is the constant flow between Quake Guy and the beasts coming from all sides. Featuring destructible doors, and a huge range of monster types, The Forgotten Sepulcher manages to fill out this medieval swampy environment that dwarfs older maps. 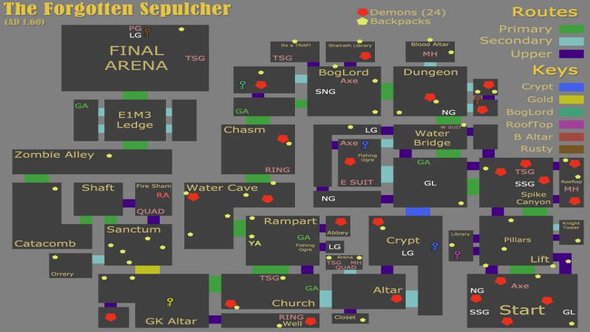 What’s impressive about Forgotten Sepulcher isn’t so much its size as what it achieves through its layout. As Quake made its name on frantic gameplay, longer and larger maps tend to either slow the pace or make it repetitive, detracting from the original game. However, this map manages to create such a network of interwoven passages and secrets that it still feels inherently like a Quake map, just bigger, better, and with more bombs.

If you want to try out The Forgotten Sepulcher for yourself, the good news is that, as long as you have Quake installed, the setup is pretty basic. First, you need to download this version of Quakspasmand drop those files into your main Quake directory. Then create a new folder named ‘AD’, and drop Arcane Dimensions into it, as well as downloading and dropping in ad_sepulcher. Run it from the Quakespasm shortcut, go to mods, and select the “AD” folder. Take the portal on the far left, and go right from there, and welcome to The Forgotten Sepulcher.