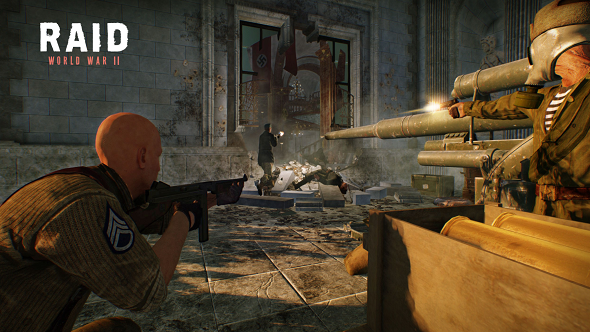 Starbreeze, Lion Game Lion, and 505 Games just announced the launch date of Raid: World War II today. The co-op game will have you and three pals face off against the Nazi war machine on September 26.

Like PayDay, Raid will mix action with stealth, asking players to coordinate against overwhelming odds. Because this is 2017, there will also be unique character classes, customisable weapons, armour, and hero abilities.

Missions won’t all be as one-note as they were in PayDay – a game about robbing places over and over – though. We’ll head across real-world WW2 conflicts and take on missions that include sabotage, robbery, and even assassinations. There is a bit of stealing, though.

“The goal in Raid: World War II is simple – sabotage, assassinate and pulverize everything bearing a swastika – mess with Hitler and steal his treasures,” said game director Ilija Petrusic. “With the Nazi regime as the ultimate evil, Raid brings together four unique characters with playstyles that complement and enhance each other as they fight and steal across Europe.”

Each player takes control of one of four prisoners of war, freed from their Nazi captors by a British intelligence officer so they can go forth and seek sweet vengeance, and riches, of course. Check out the official site for more.