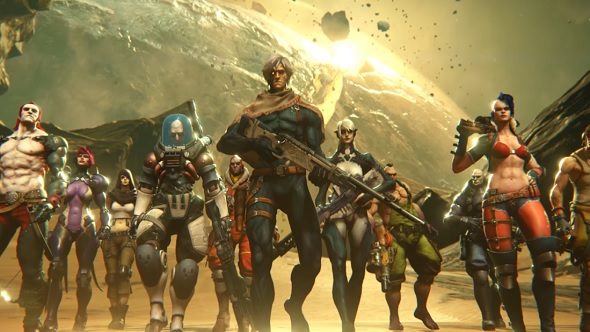 Announced back in April 2016, developer MercurySteam have finally released additional details on their upcoming 4v1 shooter, Raiders of the Broken Planet. Alongside a new trailer, more details on its campaign structure and the first of its character comics, MercurySteam have also announced that there will be a special Raiders of the Broken Planet beta running from May 13-14.

Foster the spirit of cooperation with our list of the best PC co-op games.

As an asymmetrical shooter-brawler hybrid, Raiders of the Broken Planet has players running through themed campaigns as either the titular Raiders, or the sole antagonist. If you play as a Raider, you work together with a team of three other players to complete missions and hopefully defeat the campaign’s villain. If you choose to play as the antagonist, your goal is to stop the Raiders by any means necessary, using your army of AI-controlled soldiers. Each side has their own unique missions and story to complete, so it pays to play both sides into order to experience the most of each campaign.

According to MercurySteam, Raiders of the Broken Planet is set to “release soon”, coming with the Alien Myths campaign to start players off. From there, three other campaigns will launch throughout 2017, telling different stories from around the Broken Planet. These campaigns can be played in any order, with each one following different Raider teams facing off against new antagonists.

If you are interested in trying out Raiders of the Broken Planet before its launch, MercurySteam have recently relaunched the game’s website to allow players to sign up for its closed beta. It will run from May 13-14, with players being able to provide feedback and group up with other Raiders via the new Raiders Hangout community portal. Don’t worry if you cannot find three other Raiders to group with, the full game allows for both offline single-player and online multiplayer.

To explain the backstory of some of the Raiders, MercurySteam are also releasing special character comics for each of the game’s Raiders. The first comic is about Raiders’ leader Harec, centering around his quest to protect his homeworld from foreign invaders attempting to pillage the planet’s precious resource, Aleph.

For more information about the Raiders of the Broken Planet and its beta, check out the game’s official website.