Raiders of the Broken Planet is the latest game by MercurySteam, the people who brought us Castlevania: Lords of Shadow and who are now working on Metroid: Samus Returns. It’s got a new trailer, and its first instalment has a release date: September 22.

Collaborative mayhem is the best mayhem – get your fix with the best co-op games on PC.

I say ‘instalment’ because it’s episodic. You can play the prologue entirely for free; it includes two missions across four stages, several characters, and both single-player and multiplayer modes.

If you like what you see, you can then buy the first episode for £9.99 ($9.99 and €9.99). Entitled Alien Myths, it extends the story and adds new characters. Three more campaigns will be released “at regular intervals,” each offering a new perspective on the central conflict, and capable of being played independently.

What’s that conflict, you ask? Well, there’s a group of human raiders, who are off scouring a broken planet on the edge of the universe for an energy source called Aleph. Unfortunately, they get stuck there, and start falling out with each other. The fighting gets violent, which ticks off the locals, who recruit a ragtag resistance and start fighting back. 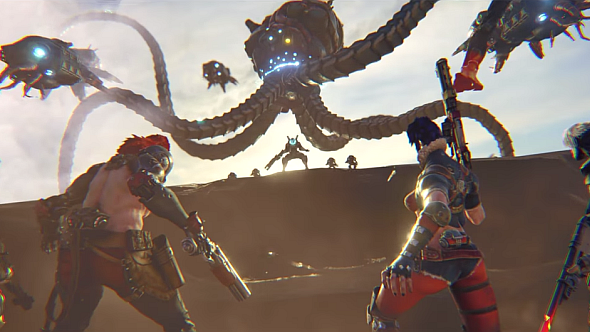 Besides some varied character designs in typical ‘hero shooter’ style, Raiders brings a few new tricks to the party. One is Aleph itself: it increases resistance, aim, and self-healing rates, so you’ll want to absorb as much of it as you can from your enemies. You’ll need to do that quickly, though, because it’s gone forever unless it’s absorbed before your enemies die – this forces you to get up close with your enemies via a brawling mechanic. You also have to manage your ‘stress’, or else your Aleph signature becomes visible to enemies, even through obstacles.

Raiders of the Broken Planet launches on September 22. It doesn’t have a Steam page yet, but in the meantime, you can learn more at the website.