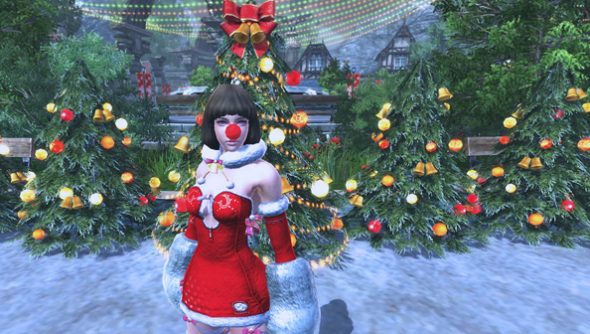 Despite our Paul’s best efforts, RaiderZ is in all likelihood one of the myriad MMOs you don’t know a thing about, existing in a realm just beyond perception. There is, after all, just so many of them. This one’s different though – all action, all the time. And it’s hoping to gently shuffle its way into your mental ‘Yes’ box with its Christmas event.

Proceedings kicked off at the start of this week, and have seen RaiderZ’s Ingen Freeport inundated with holiday costumes, buffet snacks and hot spiced cider. There are two new mounts on offer as part of a Christmas sale, which might come in handy if you’re jumped by ‘Thief Santa’.

Yes – Thief Santa is one of St Nick’s less jolly variants, and will spawn at random to attack players. Murder him and be rewarded with in-game gold and mystery Christmas customisation items. While out slaying other lesser monsters, you’ll also pick up Christmas Cards, which can be handed to Chris back in Ingen to craft into a unique holiday item, the Sock Package.

Beyond sneaky Santa and nefarious friends, there’s a major new Christmas instance. Trigger it by talking to Santa Doming tribe member Happy in Ingen, who’ll recruit you in preventing the Ice Queen from reaching the city. Rewards include rare accessories, customisation items or, potentially, a permanent mount.

One of RaiderZ’s great draws is its humongous boss battles in the great outdoors. There’s a fair bit of that on show here: