What is the last thing you will hear before you die? Through its cast of hungry creatures, Rain World presents a zoo of terrifying possibilities: lizards let out a deep hiss from their bellies, scissorbirds snap their metal beaks, the soothing rustle of leaves turns your blood cold after an encounter with monster kelp.

It is the imaginative storytelling of What Remains of Edith Finch that captivated Joel this year.

In this game about the day-to-day survival of a slugcat you quickly learn that everything is a tell. As you search for food in the short time it is safe to venture out into this alien ecosystem – between the lengthy bouts of deadly rainfall – you perform a dangerous investigation. A sound, the twitch of a tail, an interspecies squabble, all contribute to your understanding of each new beast so you know when to run from a predator or pounce on prey.

The tiny team behind Rain World spent years tweaking the behaviour of each animal so that it appears they think for themselves. They are not single-minded videogame entities with set patrol paths. Instead, they are concerned with their own survival, just as you are, freely moving across and reacting to the environments in search of food, safety, and shelter. The result is an unpredictable, living world that surprises as much as it punishes – best tackled head-first without any prior knowledge to aid you. 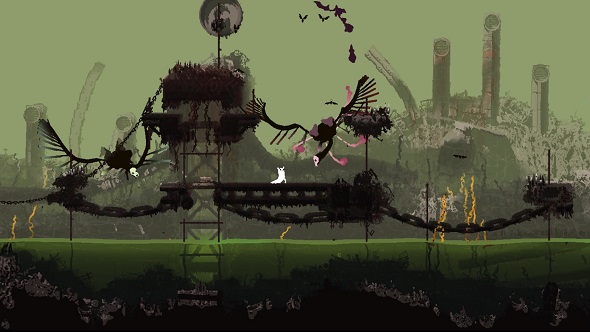 The pole plant exemplifies the thrilling desperation of the experience. Amid the rusted, industrial ruins there are often rebars that the slugcat can cling to and jump across. Sometimes, one of those rebars bends and grows red splinters upon contact – a second’s warning before it drags whatever poor morsel has fallen for its brilliant camouflage. Early on, the pole plant is a major threat, but later you learn to utilise it to bring down even the humongous, gas-spilling vultures that terrorise wide-open areas. Having a trick like that in your arsenal isn’t the result of unlocking abilities on a skill tree, it is hours of trial-and-error, hundreds of deaths – it is the child of your mistakes.

Learning how to manipulate and criss-cross the behaviours of Rain World’s menagerie to your advantage is its greatest joy. Dangle a grub in the water and the frog-like swimmer you are trying to catch will dart up to eat it. Simple exploits like this are never explained but instead found through experimentation, as long as you are curious and persistent enough. Through this is born an exhilaration in discovery that is, unfortunately, sorely lacking in many games.

But Rain World has more to it than matters of the corporeal world. Stick with it and the game’s true complexity shows itself, the history of its mysterious planet emerging from the electronic placards and decaying murals in the detailed backgrounds. Rain World blossoms from a gruelling survival story into a sci-fi epic that has you meditate on both the futility and beauty of life, right up to and beyond its magnificent ending sequence. It is a game about finding answers to the most important questions in life: Where to find food? How to escape those snapping jaws? Why go on living? And, finally: What does it all mean anyway?