It’s been six years since the last Rainbow Six. My housemate and I still play Vegas 2 most weeks, it’s one of the finest coop series ever released. Rainbow Six: Siege has been a long time coming but it looks well worth it.

A multiplayer game that pits two teams of five players against one another, one play Rainbow, trying to extract a hostage from a siege, the others play terrorists trying to keep hold of the hostage till the clock runs out,

Each multiplayer level acts as a different siege, one with multiple entry points for Rainbow. In the demo shown the setting was a suburban home. While Rainbow picked which entry point they wanted, first using a small drone to spy on the house and find out where the hostage was being held, the terrorists solidified their position – reinforcing doors, barring windows, and erecting steel cover points. It looks like both teams will be equipped with gear that suits their roles.

Rainbow chose to make a rooftop entrance, rappelling down onto the roof and then abseiling down the walls. The team placed explosives on the windows and blasted their way in, taking out one of the enemy in the process. They’re then out for the count, it looks like, while the hostage is the focus, you can win by eliminating the other team, too.

Their loud entrance draws the attention of the enemy team who start shooting into the room. This is where Siege takes a turn into the interesting – the walls disintegrate into plaster. It looks like Ubisoft have taken advantage of the small level sizes by pulling a great deal of detail into the possible destruction that can be done to it. Walls break apart with bullet holes, glass and china shatter, wood can be splintered and blasted through. It makes for a reactive environment, and one both teams use to their advantage – forcing each other to take cover. 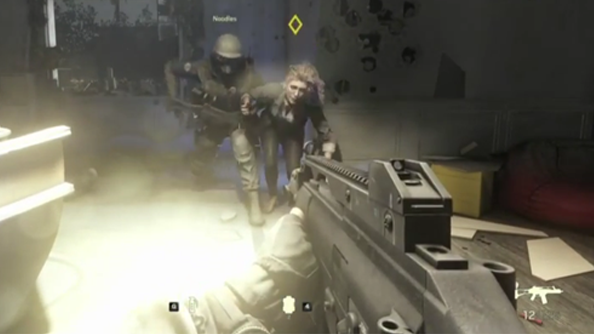 The terrorists move the hostage into the basement and Rainbow further show off the tools they command. One player goes into the room above where the hostage is being held, lays out a breaching charge on the floor, and blows a hole through the ceiling.

All but one of the terrorists are taken out. Rainbow start moving the hostage towards the exit but on the way the team are ambushed. The hostage is shot in the process and one of the players has to revive her. Rainbow is left with one living member and… the video ends.

The game looks fantastic but we’ve seen videos of canned Rainbow Six games before. They all looked good. I want some firm details from Ubisoft like when is it coming out? Is this just a multiplayer mode of a larger game? How do they plan on keeping the same siege levels entertaining?

But, more than all that, I want to play it.