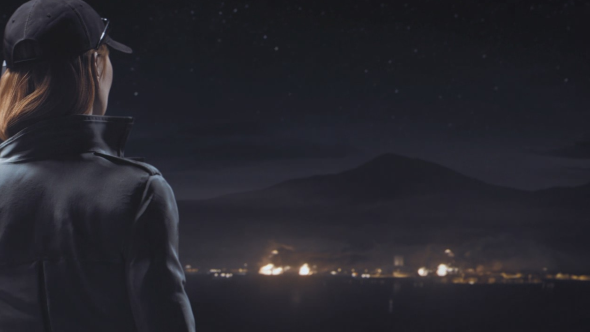 Framed by the plastic sheen of a quarantine tent, Rainbow Six operative Ash looks out across the water towards a New Mexico city at night. Most of the lights are the gentle yellows that signify civilisation, but a few are tall plumes of flame. Society, at least in this corner of the world, is becoming unstable.

“Bartlett doesn’t come close, Six,” Ash reports. “I can’t even say if this is terrorism or – something else. I’ve got no operational jurisdiction.”

Related: everything there is to know about Outbreak.

This is the sound of Rainbow Six working hard to justify its presence, not only in New Mexico, but in the co-op zombie FPS genre too. After a period where the series threatened to become bloated and bombastic, Siege cut it back to the root, presenting a selective vision of what Rainbow Six was fundamentally about – close-quarters combat that rewarded planning, and where every doorway represented the possibility of a lethal ambush.

Now that Siege is a tremendous success, Rainbow Six is beginning to branch out again, growing back into its previous bulging shape. But just as forests rarely resemble their former selves after a fire, the new and expanded Rainbow Six does not look like the old. Siege’s new PvE mode, Outbreak, takes obvious cues from Left 4 Dead and the array of undead wave shooters that have taken up permanent residence in Steam’s most-played list over the past decade. Three operatives blast their way through a biohazardous neighbourhood, taking particular aim at special enemy types – the explosive Breachers, or burrowing Rooters – and pause at critical points to fend off hordes while a timer ticks down.

Is this still Rainbow Six? It is difficult not to wonder what Tom Clancy would make of his NATO-approved counter-terrorism squad now. While Six’s involvement in this supernatural event can be charitably interpreted as a response to a biochemical attack, their methods are transformed. The Rainbow Six of old was proactive: meticulously plotting paths for AI teammates to follow through cramped interiors, all in order to burst in on hostage-takers during coordinated assaults. The team that deploys in New Mexico is forever on the backfoot, surprised from all angles and constantly reloading. 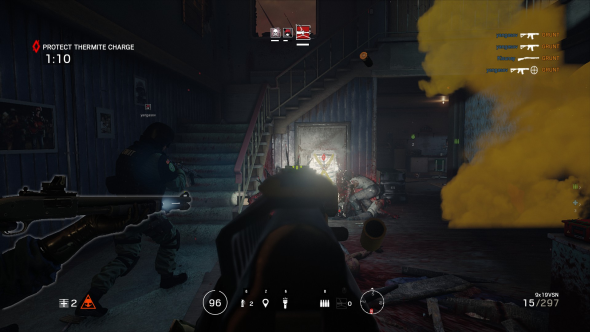 There is a unique flavour to Siege’s take on zombie defence, lent by sequences dedicated to reinforcing the walls, and a plodding movement speed that encourages slower, more considered play. But the barricades soon implode, and age-old tactics like sweeping and clearing are undermined by zombies who can spawn seemingly anywhere.

The outbreak takes place in Truth or Consequences – a real-life city built around a dam in the desert, and named for a popular NBC Radio show in the 1950s. It is far removed from the marble facades Rainbow Six is more easily associated with. The series’ first ever mission took place in a Belgian embassy, and its signature settings have long been banks and mansions. Even in the Vegas years, palatial casinos made your role clear – you had been drafted in to defend power and money. You were freeing hostages, of course, but protecting institutions in the process. 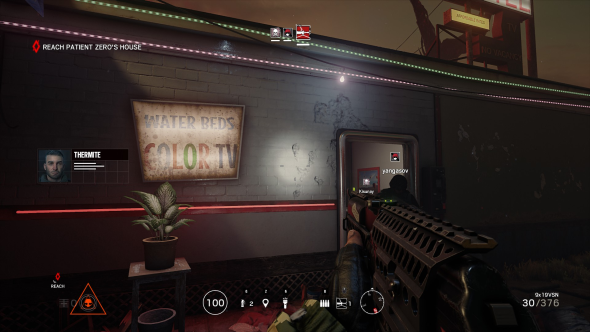 Fighting in Outbreak, there is no symbol of government to preserve. Instead, Truth or Consequences is decorated with reminders of the people you are saving. The motel that promises affordable rates, waterbeds, and colour TV; the dreamcatcher-laden mobile home linked by fairy lights to the back of patient zero’s house; the diner made of corrugated iron and satellite dishes. Even while overrun by the infected, the presence of real people in this city is palpable.

While some of Outbreak’s mechanics might feel like missteps, this move away from places of power does not. One of the better ideas of Patriots – the Rainbow Six sequel cancelled before Siege – was to pit you against terrorists determined to avenge the victims of Wall Street corruption. The group were called the ‘True Patriots’, and it does not seem like a stretch to imagine a campaign that asked you to question Six’s purpose. It only feels right that this intergovernmental task force should be looking inward once in a while – especially in a post-Snowden era, where the heroism of state agents no longer feels so black-and-white. 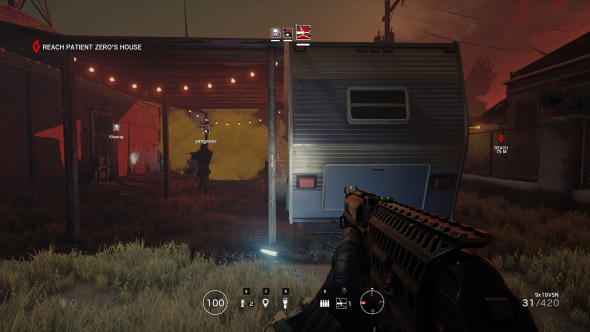 A zombie mode might not be the right forum for that. But a positive outcome of Outbreak’s change is that Rainbow Six feels a little more like an outfit for the people, not just the people in power.

“If this isn’t terrorism,” Ash concludes, “they still need us.”