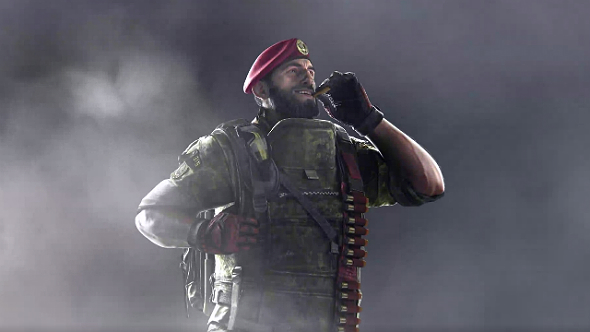 Here’s how Tom Clancy sold his name to videogames.

While the details the new voice lines offer are reasonably scarce, they do tell us a little bit about the new operators and their personalities. Maestro in particular has the most to say about his fellow operators, commenting on Ash’s small hitbox, as well as Sledge. It’s also possible that the new lines offer some information about Maestro’s gadget – current consensus seems to be that he’ll have access to a deployable turret. That would also tie into the fact that he regularly talks about not moving, which could mean he controls his turret remotely.

Alibi is a little more difficult to figure out, but does offer hints about a possible new secondary gadget. Both her and Maestro talk about a “proximity alarm” which they’re able to throw. That would also suggest that both new operators are defenders, rather than attackers, but that’s difficult to know without any sort of official announcement.

You can watch a video containing all of the leaked voice lines at the top of this article. Obviously until Ubisoft actually confirm any of this information it’s all relatively speculative. Either way, new operators will likely drop with the release of the next expansion, which should arrive around June.