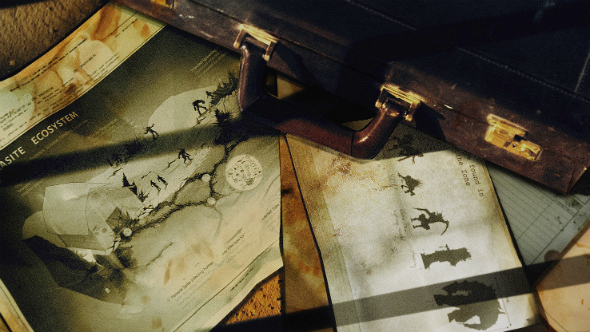 The third file in Rainbow Six Siege’s Outbreak ARG has been released. File three, which contains a selection of images and an audio file, offers the first look at the zombie-like enemies that will feature in the mission.

Here’s everything we know about Rainbow Six Siege’s Outbreak so far.

It took players only one day to access the file, which can be found at rainbowleaks.org. Three of the images stored in the file give players a first look at the enemies they’ll be facing in the game mode. They show several varieties of spiked, crystalline zombies, and suggest that there could be a specific type of zombie that makes up the majority of the horde, as well as more ‘specialist’ zombies. Among others, the images show a very large, tank-like monster, and a crouching figure that can potentially leap long distances.

The other images show transcripts of audio accounts from civilians and other soldiers, hinting at, for one thing, the sheer size of the large monster. The audio file addresses the scale of the outbreak and the impact it’s had on the town of Truth or Consequences, where Outbreak is set. You can see a full transcript of the file on the Rainbow Six subreddit, as part of a megathread with all of the information as well as every image from the third file.