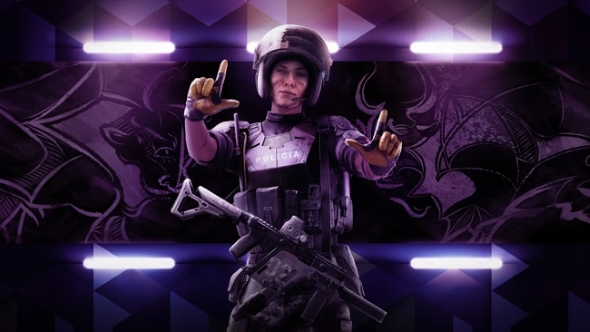 With a tap of his goggles, Jackal activates EYENOX. The screen is washed with a purple haze and luminescent footprints appear on the ground. Footprints that lead to the enemy, no less. You see, Jackal is a tracker operative, and with this new ability he’s going to break Rainbow Six Siege’s meta.

“With the education and expertise we’ve gathered through our first year, I think year two is going to be more interesting,” teases brand director Alexandre Remy. “There will be more finesse in our choices. We’re breaking the meta and breaking some design foundations.” 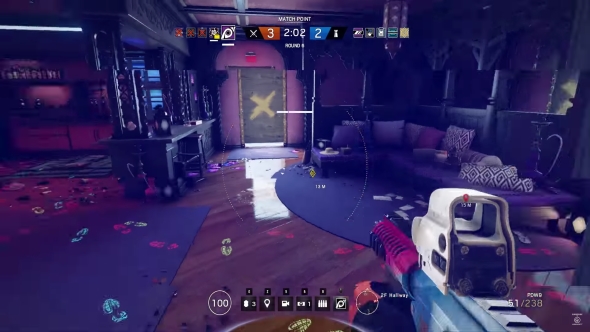 Jackal is designed to combat roamers; defending players who constantly prowl the map in hunt of attacking operators. It’s a tactic that has become increasingly prevalent as Rainbow Six Siege has matured, and operators like Caveira with her Silent Step ability have only encouraged that. “We see people saying the roamer is absolutely key in team composition, so Jackal is an answer to this,” reveals Remy. Whatsmore, the introduction of an anti-roamer may potentially push the entire meta back to the room defence tactics Siege began with.

When activated, Jackal’s EYENOX gadget highlights footprints in thermal blues and oranges. The warmer the colour of the print, the more recently it was made. By holding the F key while looking at a print, the gadget will track the operator to whom they belong and reveal their position every fifteen seconds. As a mercy to defenders this ability can only be used three times, but the lens can see footprints indefinitely. For anyone who can track without the need for a HUD icon, Jackal is going to be an incredibly powerful pick.

Talking of powerful, he’s packing an extensive weapon collection, too. The PDW9 submachine gun sporting a 51-round drum magazine is likely to be the favourite, but there’s also a C7E assault rifle for those with more conventional attacker tastes. Third on the menu is the ITA12L shotgun, but you don’t need to use it to have access to buckshot. The Spanish GEO operators in Velvet Shell are the first Rainbow characters to be able to equip shotguns as sidearms. They’re shorter and less powerful, sure, but still entirely one-shot lethal at close range.

Joining Jackal in Velvet Shell is Mira, and boy does she shake things up. “She’s based on the learning expertise and our wish to push things outside of expectations,” says Remy. Mira’s unexpected skill? She can see through walls. Sort of.

The Black Mirror is a gadget that places a bulletproof, one-way mirror window in a reinforced wall. Mira and her teammates can see through it, the enemy can’t. Talk about nightmare technology.

Mira can deploy two of these gadgets, and when set up they offer incredible extra vision. Now a team can hunker down in a metal reinforced room and still have extended vision, and they can do all this without revealing themselves to the enemy. And should an enemy linger on the other side of a Black Mirror, shooting out a small gas canister drops the glass from the frame, allowing those inside to fire through a newly created murder hole. The enemy literally will never see you coming.

Mira is going to be huge in breaking Rainbow’s current meta. With the extended vision provided by the mirrors, defending players can stay in one area for longer. This eliminates the need for roaming, since there’s less need to head out into the dangerous open to recon the enemy when you can simply watch them through a window. Combined with a Jackal on the enemy team, the roaming tactic is neatly countered. 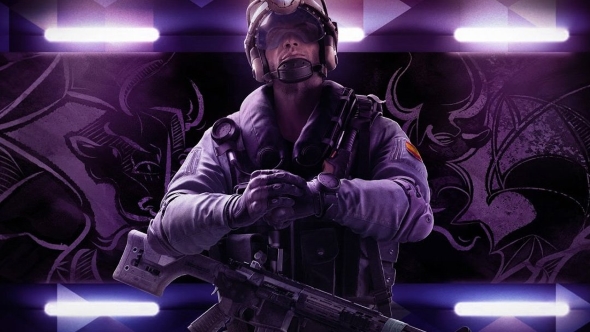 Ubisoft’s decisions regarding what operators they create for new DLC packs is based on in-game statistics. “For example we knew Thermite was the only operator able to break reinforced walls,” Remy explains. “So he was an automatic pick every time. Every attacking team had Thermite.”

“Hibana was an answer to this, to create a meaningful meta with choices,” he adds. “When players are in a situation they have to say ‘So do I pick this guy or this guy?’ There’s no automatic pick when there are so many choices and combinations possible. You get an even richer meta.”

Of course, having anti-roaming operators doesn’t eliminate roaming entirely. Indeed, that’s not even the aim of Velvet Shell. It’s not about destroying tactics and permanently changing the meta, but offering choices so that there are always options and surprises. With characters like Caveira and Valkyrie roaming is always going to be a choice for players, but Mira makes hunkering down an equally attractive option.

After the brilliant introduction of Hibana and Echo in the Red Crow DLC, it’s hard to say that Velvet Shell is the best new operation that Ubisoft have created. But, compared to the characters added in the early months of year one, Mira and Jackal are leaps and bounds ahead. Like Hibana, they’re designed to really shake things up and offer interesting new choices, and I think our new Spanish comrades are going to be favourite picks long after the luster of Velvet Shell has worn thin. And, provided the three other nations in year two are as equally well designed, it’s going to be an incredibly strong year for Ubi’s deeply tactical shooter.