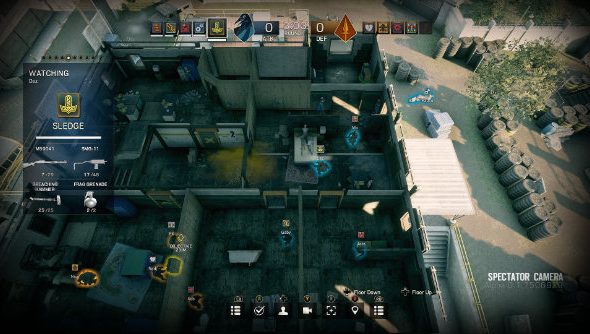 Bad news for solo infiltrators – Rainbow Six: Siege won’t have a story mode. After completing the training, it looks like single-player will be restricted to hot bot action within the game’s initial offering of arenas.

I’m a bit deflated by this news, to be honest. Though the multiplayer looks cracking, I’ve always really enjoyed the tense campaigns of the Rainbow Six games. Planning my route through a level, gradually creeping through and clearing rooms, was something I enjoyed doing at my own pace. I can’t see that same feeling being captured when the enemy are human and they know you’re coming.

It was fantastic in co-op, too. Playing through Vegas 2 with a friend is one of the best co-op experiences I’ve had. You may be able to play Siege’s maps in co-op, but I imagine it won’t be long before familiarity sets in within these smaller sandboxes – and I’d always feel like I should be playing against humans.

“There is no story mode per se,” said Mitchell. “You go through training, where you get to experience different operators and their devices. You can play against enemy AI in co-op through all the maps. You can customise matches, so that’s what we’re offering on the single-player side of things

“It’s a pretty good training ground, and on top or that you’re unlocking the same content as you would playing in PvP. You’re still gaining Stars, Renown Points, and new operatives”

After seeing the target footage for Rainbow Six: Patriots a while back, I was hoping there would still be a substantial story to ‘open, frag and clear’ my way through, but no such luck.

I still think it looks like a solid shooter and I love what it’s doing with level destruction, I’m just a bit disappointed. I’m sure Ubisoft expected this reaction, too, hence the recent reveal that all future multiplayer maps are planned as free downloads.

How do you feel about the lack of a campaign? Let us know in the comments.