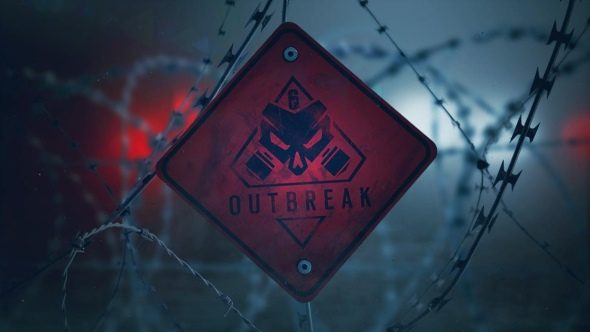 It’s a good time to go tactical. After a hugely successful year, and with the 2017 pro-league grand finals approaching their climax at the time of writing, Ubisoft Montreal took a break from the competitive festivities to give the world a sneak peek at what the next year will hold for the surprisingly successful competitive FPS.

Rainbow Six Siege‘s third year will yet again follow the quarterly season format – a new content update every three months, each including two new operators. To reduce content bloat, Ubi Montreal are planning on only introducing two seasonal new maps to the rotation this coming year, with the other two seasons putting a fresh twist on things.

Year 3 begins with zombies. Or at least something close to it.

Want more zombies, less tactics? Where have you been this past decade? We’ve got you covered, though.

Year 3, Season 1 will be known as Operation Chimera, and will feature two new operators – one from France, one from Russia, both with backgrounds in bioterrorism containment. It’s this interesting little quirk that leads us into Mission: Outbreak, which is set to be a 3-player cooperative event that’ll be active on the servers for a month. Given R6 Siege’s predilection for barricade-building and a little conjecture on how undead hordes love tearing down the works of man, it seems likely that we’re looking at some kind of zombie survival challenge. 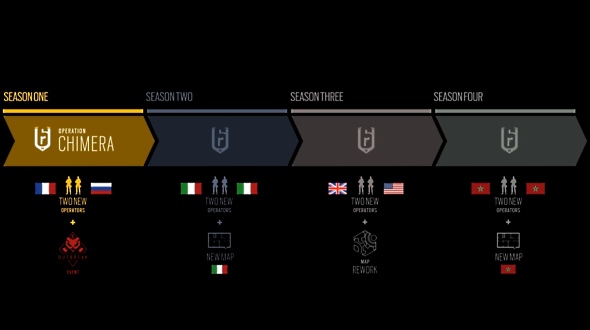 Outbreak will be free and open to anyone who owns the game, although they did mention that there will be a series of new cosmetic items – most likely premium – accompanying the event. They plan on revealing more details on the final day of the Siege Invitational event next February, beginning on the 13th and ending on the 18th.

Their plans for the rest of the year are a little more straighforward. Season 2 (as yet unnamed) will have an Italian flavour, with two new Italian operators joining the roster of playable characters, and a new map set in Italy itself. Season 3 will add the usual two operators – one from the UK, one from the US – but no new map. Instead, they plan on removing one existing stage from the rotation, and completely overhauling it, only returning it to the servers once they feel it’s sufficiently refreshed and improved.

The fourth season of 2018 will be taking the game to North Africa. Two North African operators are signing up for duty, and there’s going to be a new map set in Morocco, bringing a little mediterranian flavour to the proceedings. With this, the developers were proud to announce that Siege has now touched on every continent, making it a fully global game of shooting people in the face. 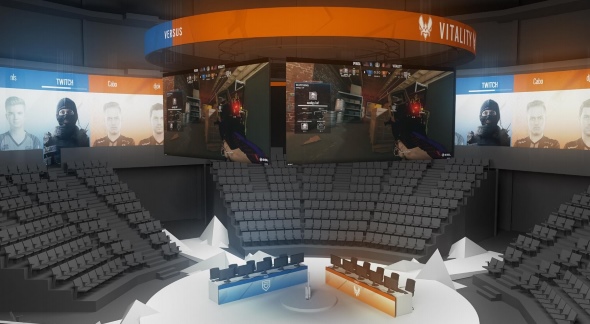 Beyond all this, they’re stepping things up further on the professional, competitive side of things. They’ll be launching straight into 2018 with a new invitational tournament; 16 teams, a $500,000 prize pot, 6 days of competition all in a very shiny new 360-degree arena, which they were eager to show off a concept render of (as seen above). The format of the event will be changing slightly from standard, with the main matches being best-of-3, but escalating to a best-of-5 for the finale.

Ubi Montreal also mentioned that they’re fully comitted to another two years of R6 Pro League support, starting 2018, which is about as close to an early confirmation of another round of content in 2019 as we could hope to hear. All in all, it sounds like Siege has a good year ahead of it, assuming we don’t all get devoured by the undead.