It’s not often that a certain feature of a keyboard – or any peripheral for that matter – is so bewilderingly great that it warrants its own mini-review. Yet the out-of-the-box wrist rest that comes with the Razer Blackwidow Tournament Edition Chroma V.2 is simply superb. Thanks, Razer, for ruining every other keyboard for me.

Want to pick up a new keyboard? Here’s our picks for the best gaming keyboards.

I suffer from acute nerd wrist syndrome. This I know, and yet I still spend the majority of my time on a computer. I know I’m asking for trouble later in life. But maybe it’s not all my fault. There are many ergonomic keyboards out there but for some reason those designs never make it to gamers’ nimble digits. With their latest Blackwidow keyboard, however, Razer have brought those two separate worlds together. This is a keyboard that, finally, might cure my self-inflicted wounds and it’s all thanks to some wrist rest-based quackery.

The magnetic padded Razer attachment puts to shame the thin, clip-on, and exclusively plastic wrist rests you usually find packaged with other gaming keyboards. Up until now, I didn’t mind the standard-fare – they were doing fine. But now I see that I was complacent. I didn’t realise what I was missing and I’m not sure I really wanted to know. 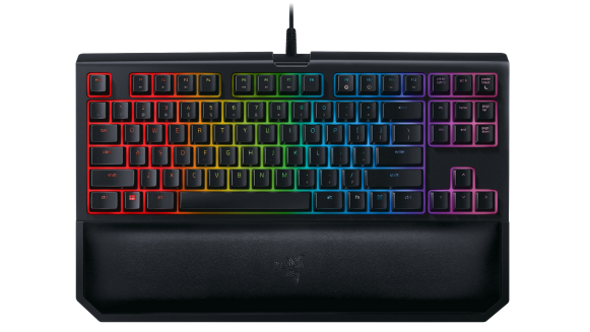 I’ll be honest: after unpacking the Razer, I initially poked fun at what seemed like an overly plush and decadent carpal-cushion. How naive of me. Once I pressed the accessory up to the bottom of the keyboard, everything snapped into place, literally. Thanks to a magnetic attachment, it holds firmly to the board, even with a chronic keyboard shuffler such as myself.

The cushion adds just the right amount of height so you can actually rest your wrists on it at all times, while supporting your palms and keeping the bottom row of keys unobstructed when typing. The height of the wrist rest takes a second to adjust to, with your thumbs only lightly resting – if at all – on the space bar, yet it allows for a much more relaxed position and overall less finger fatigue.

Soon the Blackwidow will be retired from my service and, thanks to Razer, I can never go back to my blissful ignorance. I’m sure there are plenty of other wrist rests offering likened experiences to the Razer but now I’ve had an experience with one of the best I fear that nothing else will do.

If Razer want this wrist rest back they will have to wrestle it from my cold, dead, and incredibly well-rested hands.