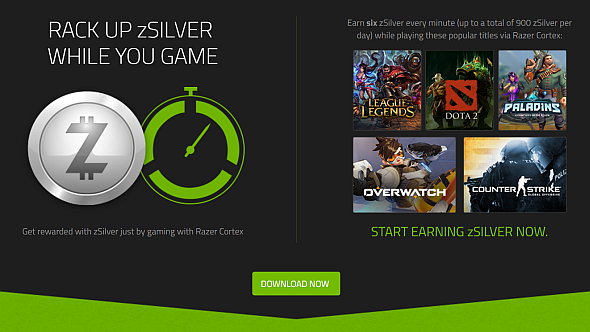 Razer will pay you to play games! In a sense! The peripheral makers with the radioactive branding want you to try Cortex, their free, performance-boosting software, so they’re giving you a little incentive.

Check out the best Dota 2 heroes for beginners, for a leg up in one of the eligible games.

The scheme is called ‘paid to play’. Here’s how it works: head toRazer’s siteand download Cortex. You might actually be interested in this anyway: Razer claim it uses a suite of optimisation tools to boost frames-per-second and cut load times. It also has a price comparison engine to help you find the best deals on games and a casting tool for streamers.

Anyway, use Razer Cortex to run one of League of Legends, Dota 2, Paladins, Overwatch, and CS:GO, you’ll be ‘paid’ in zSilver. That’s Razer’s loyalty currency, distinct fromzGold, their real money currency. Basically, they’ve taken the model of free-to-play games and applied it to real life.

ZGold is redeemable in a number of games and online stores, but for now, zSilver is only good to buy selected Razer products. Which ones? The full line-up ishere, and good news is some of their leading products are eligible, including the Mamba mouse, Blackwidow keyboard and Kraken headset. You can also use zSilver to knock some dollars off the normal price of Razer hardware.

So, the numbers: the paid to play scheme will credit you with six zSilver per minute, with a daily cap of 900. You’ll hit that cap after two and a half hours of play. That won’t go far if you’re after the good stuff – a Mamba Chroma mouse is 195,000 zSilver, which would take you just under 217 days to earn if you hit the cap every day. A Blackwidow keyboard is 220,000 zSilver, and a Kraken headset is 130,000. Even this lovely light-up cup holder, which is only available with zSilver, costs 100,000.

“The concept of everyday gamers getting paid to play has never been done by a hardware brand in the gaming industry. Gamers may reap the benefits of a rewards system simply by doing things they’re already doing.”