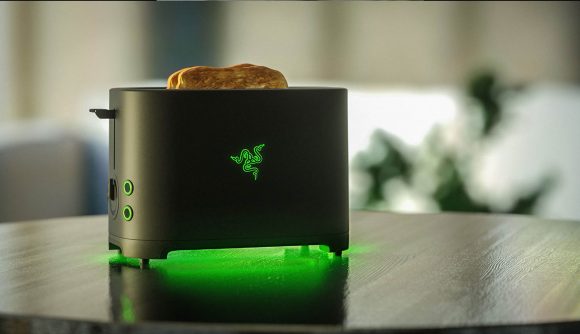 That’s not a knife… that’s a knife. An unofficial concept for an RGB knife reminiscent of Razer’s RGB toaster, in fact. Fulfilling the prophecy, that all must be RGB in the end (there is no escape), an artist has taken to Twitter to display what they believe could be the next level for RGB lighting and the next step in a long line of increasingly irrelevant ‘gaming’ products.

Henceforth to be known as the one true Razer Blade (thanks og_pessimistic), Twitter user ricebirdmon has added RGB lighting down the length of the Blade’s blade. There’s also a scroll wheel and a couple of keys along the knife’s handle – for all sorts of culinary macros, one would assume.

The knife has in turn caused a dogpile of further ‘gaming’ products, by way of RGB lighting alone, of course. These include Tokyo Tower, Tokyo Skytree, the aptly-named RGB Rainbow Bridge, and even a poorly-edited iron.

There’s no doubt that Razer’s RGB toaster, nicknamed Project Breadwinner, will have had some influence over the Twitter thread. What started as requests from the community, and later an April Fool’s joke, swiftly became a petition by fans to get the toaster made, even involving Razer CEO Min-Liang Tan and a couple of tattoos. Whether the company sticks to its vague half-promises of manufacturing the toaster or not, the PR stunt certainly made a lasting impact.

For now we’ve not a Razer toaster or knife to speak of, but its dedicated fan community remains committed to the bit.