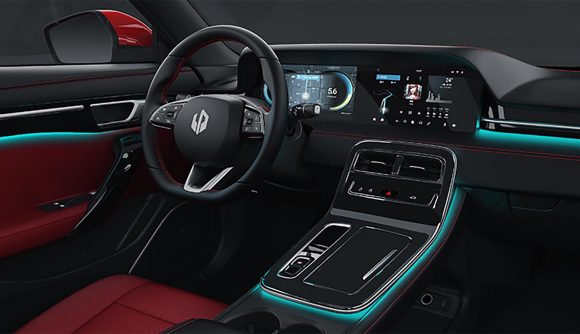 Razer is pairing up with an electric vehicle startup based in China to take RGB lighting on the road. Leapmotor’s flagship electric car, the S01, comes with a smart cockpit design complete with atmospheric lighting, and this will soon be compatible with Razer’s RGB lighting ecosystem, Chroma, which the company touts as being the “world’s largest”.

Razer’s RGB lighting ecosystem is employed across a multitude of devices: everything from its own gaming keyboards, mice, phones, and laptops to the widely popular Philips Hue products. With road worthiness now on the cards, you will potentially never have to forego RGB lighting no matter where you go. What a world.

Razer CEO Min-Liang Tan announced the new lighting partnership on Instagram, during which he also hinted at Razer’s plans to “Chroma everything”. Rather unsettling. But even if Razer may be the biggest system going, it is just one of many gaming peripheral companies fighting it out for RGB software supremacy, and there’s still a long way to go before a single lighting system is the go-to for gamers.

Yes, it’s about that time of year when Razer likes to roll out one of its more ostentatious prototypes to generate a little buzz about its new products at CES. And with the show kicking off next week it’s not much of a surprise to see the company’s CEO making waves. And ripples. And rainbow effects.

Razer Chroma is the world's largest RGB platform and I'm excited to announce that Leapmotor, the hot electric car startup from China, will also be integrating Chroma in their cars.

Last year it was Project Linda, a laptop husk intended to dock the Razer Phone into. The year before that it was Project Valerie, a tri-screen gaming laptop that looked about as breakable as it did alluring to thieves. That is to say very, as it was swiftly stolen from the company’s booth.