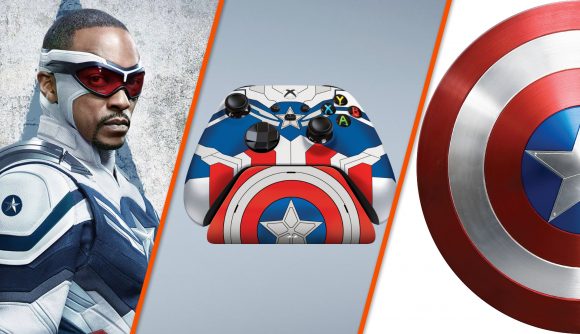 Razer has just added to its long list of limited edition licensed Xbox controllers, giving its gamepad and quick charging dock a splash of Captain America-coloured paint. More specifically, it’s inspired by the star-spangled uniform that features in the Marvel Cinematic Universe’s Falcon and the Winter Soldier, and looks fit for an Avenger.

We can’t comment on whether it’s as tough as Vibranium without a hands-on, but it takes the shape of the same Core controllers that ship with Xbox Series X and Series S. It’s pretty comfortable with textured grips to keep the pad firmly in your palms, and it features more precise Impulse Analog Triggers on the rear that vibrate so you can feel the impact of every press.

The quick charging dock doesn’t just look the part as Cap’s shield, as Razer says it can fully juice up your controller in under three hours. The flashiness should make it easier to remember to slot it on the magnetic pins at the end of a gaming session so you don’t experience the pure rage of finding a dead controller when you need it most – or at least you’d hope that’s the case.

As usual with Razer products, this works perfectly fine with your gaming PC as it does with your console. Simply plug it in via USB or pair it up with the official Xbox Wireless Adapter that’s sold separately, and you’re good to go.

If this design doesn’t take your fancy, Razer says there’s more to come, hinting that we’ll see some Star Wars shenanigans come May 4. Our money’s on a Grogu (Baby Yoda) gamepad, since we’ve already seen Mandalorian, Boba Fett, Darth Vader, and Imperial models in the past. Other IPs are also on the table, and while we’d love a Merc with a Mouth version ahead of the potential Deadpool 3 release date, it’s more likely something Doctor Strange 2-shaped will head our way given that Multiverse of Madness is just around the corner.