As the throaty narrator in Reaching for Petals intones: “Memories of the truth contort into beautification of reality.” That’s a wordy, walking simulator way of saying that the standout events in our lives have a way of twisting romantically in the mind, taking on a new, rose-coloured hue.

This first-person adventure portrays a kind of remembered hyper-reality, though the real world creeps into it in other ways. Not least the photorealistic appearance of the developer’s mother as the main non-player character. But we’ll get to that. 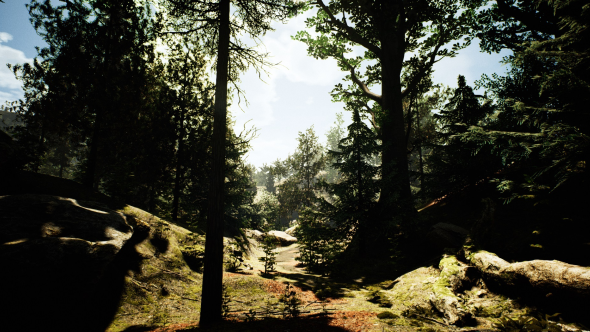 Reaching for Petals may not be literally rose-tinted, but it does adopt an art style that reflects its nostalgic view of events. Watch the trailer and you’ll see a forest, lit in almost-white light, so that the lower branches of its trees are plunged into silhouette.

“It’s mostly just Unreal Engine’s default directional lighting,” Blue Entropy Studios head Christian Ledbetter says. “We cranked the crap out of it. A lot of games leave the intensity at 10, but we turned it up to 30 or 40.”

The intensity is such, in fact, that it creates uniform areas of maximum brightness. It’s an outcome that photographers call clipping and usually seek to avoid. But Ledbetter has embraced the effect, balancing the look with darkened shadows caused by auto-exposure.

You’ll recognise that particular trick from some recent triple-A games in which exposure automatically adjusts when moving between light and dark environments. Creep into a house in Assassin’s Creed Unity and a scene of Parisian domesticity gradually becomes visible. Walk into the shade of a towering tree in Reaching for Petals and you’ll see a similar effect play out, imitating how the human eye adjusts from light to dark.

“It’s really hard to convey that in the trailer,” Ledbetter says. “When you’re playing the game there’s a lot of contrast in spots that naturally would have contrast. So when you walk into a shadow, all the shadows will become a little lighter and you’ll see the details.”

Sprinkle a little bloom and fog to disperse the light into pretty colours, hard-set a more natural palette in post-processing, and you’ve got something like the art style of Reaching for Petals.

“We were going for a vibe like it’s not a real place,” Ledbetter notes. “It’s more like an exaggeration of real life.”

A mom and pop production 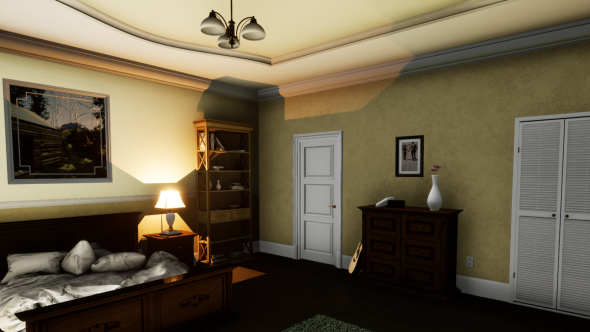 The plot of Reaching for Petals flits between memories, and at the end of each level the player collects a lotus flower – transporting them back to the home of a couple named Kai and Renee. The house, which Ledbetter describes as an “unintentionally watered-down” version of Gone Home, is based on the structure of his own parents’ home.

“That’s how I saved some effort,” he says. “With interior design I’m not nearly as good, but I don’t think it showed.”

The decision helped to ensure spatial sense when it comes to slotting the rooms together. And more than that, it’s in keeping with a project that has become deeply personal. Kai, the protagonist, is based on Ledbetter’s stepfather, while Renee bears an uncanny resemblance to his mother. 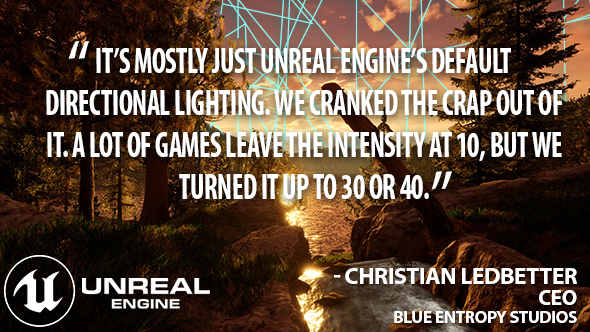 “You don’t ever get too close to the character,” he says. “But it is an actual, photorealistic version of her in the game.”

Ledbetter asked his sceptical mother to hold still while he took around 200 photos, before scanning and reassembling her image in the game. Renee appears throughout Reaching for Petals in ‘supernatural’ events.

“She thinks it’s kinda cool,” he laughs. “She’s not much of a videogame person or anything. She was like, ‘I don’t know how you’re going to do this’. But then a little later she was like, ‘Wow, how in the world?’” 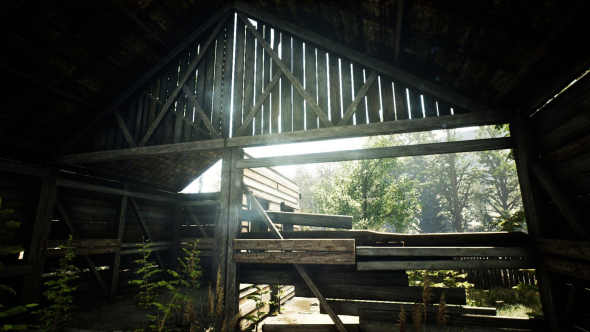 At first it’s a single piano. But soon enough there’s a cello in there too, and eventually, Reaching for Petals’ soundtrack becomes something else entirely.

“By the end of the game it’s literally a full orchestra just going at it, because something beautiful is happening,” Ledbetter explains.

Blue Entropy’s sound engineer, Gustavo Coutinho, has worked with a piece of software named FMOD – a sound effects engine that allows for dynamic music. If you walk from the forest in Reaching for Petals to a nearby stream, the soundtrack will morph into something more appropriate, and switch over again if you backtrack.

“The music never really completely stops,” Ledbetter says. “There are some moments where it dies down, just so you can hear the ambient sound, but music is always playing. It will seamlessly transition from ambient, to a random style, to a piece with a theme that shows up throughout the game.”

The developer is most proud of the moments where the visual and audio elements complement each other, combining to tell his story of love, loss, and ambition.

“There are scenes where you see Renee off in the distance, and there’s something special happening,” Ledbetter enthuses. “There’s a huge group of fireflies around her, the music builds up, and you look around a corner and she’s gone. It all fits together and conveys this emotion.”

Reaching for Petals will come to Steam later this summer. Unreal Engine 4 is now free.

In this sponsored series, we’re looking at how game developers are taking advantage of Unreal Engine 4 to create a new generation of PC games. With thanks to Epic Games and Blue Entropy Studios.