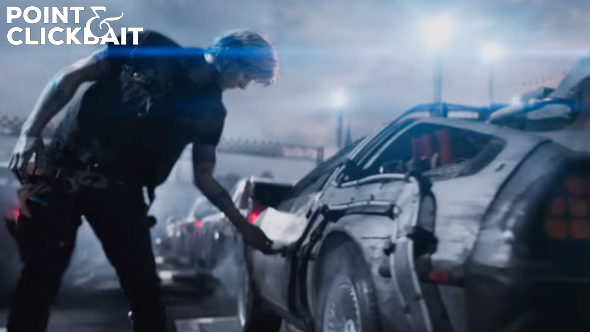 Robin “ThatNerdRobin” Sutton explained that after spending dozens of hours going frame-by-frame through the film, documenting every reference on an annotated spreadsheet and stitching it together into a coherent video, he found himself staring at the entire Ready Player One movie.

“I thought maybe I’d made some kind of mistake, so I went back and checked all of the references, and I didn’t miss any,” a bewildered Sutton explained. “I can’t explain it.”

Sutton is now fighting a copyright claim by Warner Bros, who have flagged and demonetised his video for “being the Ready Player One movie”. A spokesman for Warner Bros. explained to Point & Clickbait that while they were sympathetic to Sutton’s position, it was necessary to “provide clarity” on the issue.

“We’re greatly inspired by the fan response to our latest movie, where nerd references belong to the great teeming mass of humanity and anybody can do anything they want with them at any time,” said Warner Bros.

“Unfortunately, that movie is fictional. Here in the real world, nerd culture legally belongs to us and we will obliterate anyone who suggests otherwise.”

Point & Clickbaitis the internet’s finest source for extremely true, real, and in no way satirical gaming news. It is also a part of thePC Games Network. Point & Clickbait are currently raising money for a 2016 annual on Kickstarter.