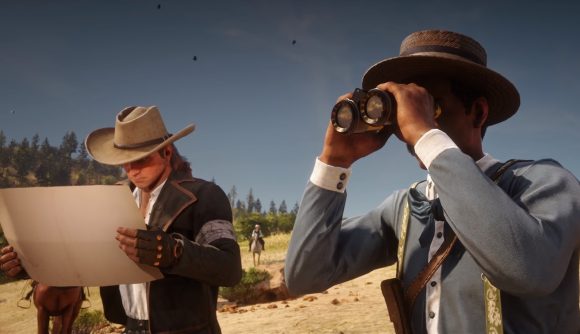 Red Dead Online is a very strange place right now. Since a patch went live Monday, August 10, players have been reporting a myriad of issues on Reddit and Twitter. Some of the things we’ve seen are the sort of stuff you’d expect – connection issues, lag, and various glitches and bugs. But it’s all gotten a tad weird. Horses are disobeying the laws of physics, while towns are deserted. Unintended ghost towns are nothing new in Red Dead Online, but some players have begun to notice the presence of a mysterious, bald NPC.

No one knows who he is or why he’s there, but his presence is only made more conspicuous by the absence of others. To some, he appears normal, whereas to others he appears as a ghost. Sometimes he just floats. Several Red Dead Online players have taken notice, though, and it’s been a topic of discussion in several communities.

While Red Dead Online has several issues right now, Rockstar is working on another patch to sort things out. “We are aware some players may currently be experiencing a range of issues as a result of yesterday’s RDR2 Title Update,” the developer says on Twitter. “We are currently developing fixes to address these and will share more information as it is available.”

Besides the presence of our bald friend, the disappearance of animals and various NPCs has also meant that players are struggling to play Red Dead Online’s Naturalist content. You can’t study animals and take your findings to Harriet if they’re not there, after all.

Other players are reporting that they can’t shoot their weapon, which also makes completing specific missions difficult.

My friend just found him pic.twitter.com/W02Igm2jit

The Red Dead Online community has taken the setback in their stride and has churned some good content out of the unfortunate incident. Until the fix lands it doesn’t look like many will be playing until things are ironed out. I hope our bald pal stays around, though.