Rockstar have us spinning our imaginary six-shooters again today with the second trailer for Red Dead Redemption II. At an all-too swift minute and a half in length, it shows precious little. But there’s enough in there for your favourite, eagle-eyed PCGN correspondents  to glean a few things about the game. Nine things, in fact, which you can find handily explained in the points below.

Need to know more? Here’s everything we know about Red Dead Redemption 2. 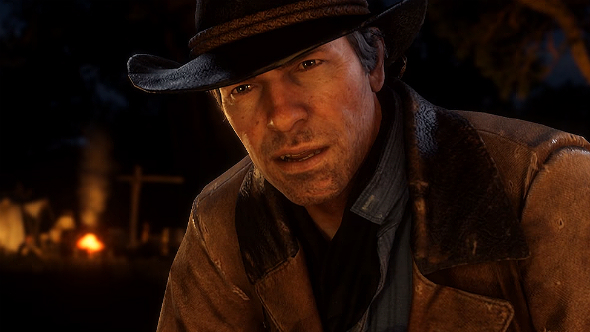 Red Dead Redemption II’s leading character is Arthur Morgan, and what a ghastly ol’ chappie he is. The trailer opens with him demanding money from a man whose fate we wouldn’t want to guess, and the voiceover emphasises that he is a wanted man. Later he bullies the teenage son grieving for his dead father. He is part of the notorious Van der Linde gang, so that’s no real surprise, but Morgan is one of the most grim Rockstar characters we have ever seen.

It also appears that Morgan is one of the gang’s most senior members; he seems to push other characters around and call the shots. But will he remain this detestable figure for the entire game? Rockstar are sticking with ‘Redemption’ for the title, and presumably this will have to factor into the narrative. Like John Marston, will Morgan see the errors of his ways, or will he be a monstrous shit all his life akin to GTA V’s Trevor? 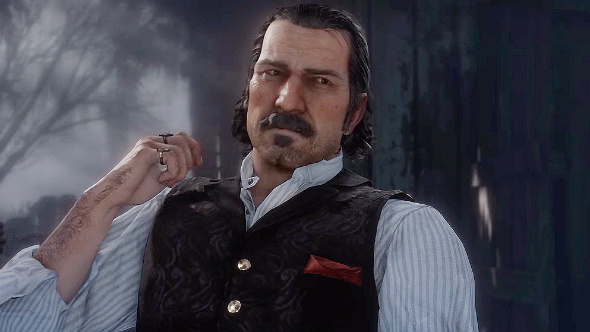 The Van der Linde gang is back, which naturally means its leader returns, too. The vicious Dutch, complete with Daniel Day-Lewis facial hair, makes an appearance at the end of the trailer, and he clearly commands respect even from mean Mr. Morgan.

If we are seeing the return of the ‘old gang’, presumably there will also be appearances from Bill Williamson and Javier Escuella, too. Not only them, but also the key players from the original game: John and Abigail Marston.

There will be robberies 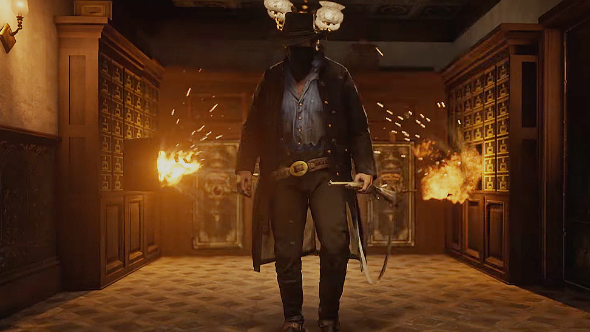 The YouTube description for the trailer states that the gang will “rob, fight and steal their way across the vast and rugged heart of America,” while the video itself shows the gang doing a whole host of theft-based activities.

An early sequence shows Morgan holding a bank manager at gunpoint, while later ones show a large vault room being broken into with dynamite, as well as what appears to be an rather ambitious train heist.

Robberies in Red Dead makes a lot of sense. Not only are robberies a key component of classic Western cinema, but Rockstar were showered with praise for Grand Theft Auto V’s heists. And from what we can see here, they would follow the same patterns as GTA’s heists, starting with small local bank robberies, and working up to elaborate, multi-stage operations. And if nothing else, the planning and execution of gold thefts is even more of a perfect fit for Red Dead Redemption than they are for GTA.

It’s a prequel, but perhaps only by a couple of years 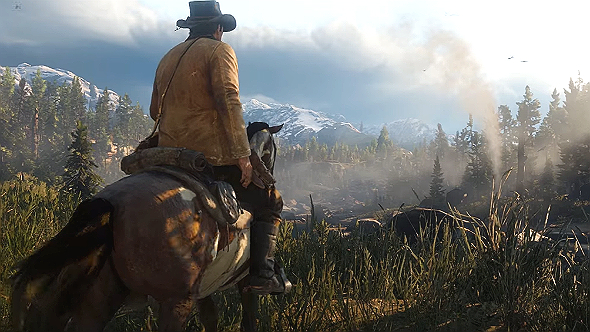 The trailer does nothing to explicitly state when Red Dead Redemption II is set, but the first game’s lore makes us think the events could take place around 1906. In that year, the Van der Linde gang botched a robbery; Dutch shot a woman named Heidi McCourt, and the gang were attacked by government agents. They retreated from the shootout, leaving the first game’s protagonist, John Marston, for dead.

It has been suspected that Red Dead Redemption II would be a prequel for some time, and the presence of Dutch in the trailer confirms it is set before the events of the first game. With the numerous heist-like activities shown, it seems a good bet that this key part of the RDR lore may be the focus for this chapter of the story.

However, there is reason to believe that it could be set closer to the 1911 of the original game. The first trailer featured the line, “When the time comes you’ve got to run and don’t look back. This is over,” suggesting that the Van der Linde gang are in trouble. Morgan is shown to be shaking down men for money in the trailer, something that wouldn’t be essential for the gang if they were still at the height of their heist successes. If they are on the run from the law, though, collecting debts is a much safer way of staying afloat.

Then there is the complete absence of John Marston in the new trailer. This could be because Rockstar are holding his reveal back, or may simply be because he is not in the game since it’s set /after/ the botched robbery that left him for dead. This would also line up with some of the technology seen in the trailer, including a candlestick-style telephone; a device that was baffling Marshal Johnson in the original game. Surely he would be used to them in 1911 if they had been around for multiple years?

The timelines may overlap 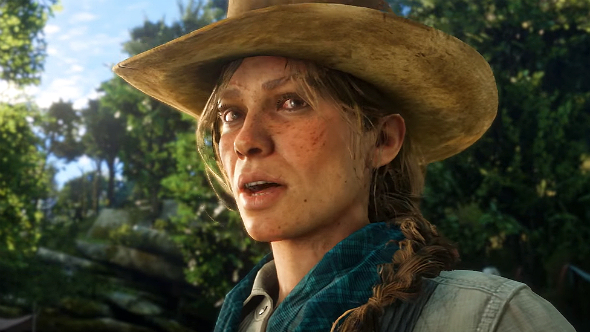 A scene in the trailer depicts a blonde-haired lady telling an unseen person that they are the only person that she trusts anymore. The issue of trust is interesting, because it indicates that relationships are breaking down. This could refer to the in-fighting that happened in the gang; links soured between Dutch and Bill Williamson, with the latter heading off to form his own gang. If the game does portray the fracture of the Van der Linde gang, then we could see the timeline overlap, or even run concurrently, with the events of Red Dead Redemption.

It may be set in three different states 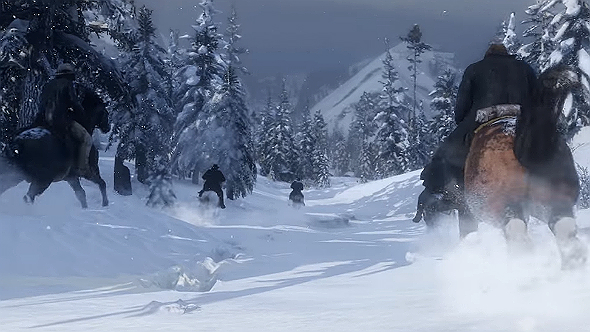 During the trailer, Morgan comments that “law men in three different states are after us.” This could be mere flavour dialogue, but the footage clearly shows a variety of different environments that could, theoretically, represent numerous different states. Furthermore, Morgan also says that the law men “chased us from the west, over the mountains.” If this dialogue is from late in the game, we could take part in this long-form chase. It would explain the change from snowy mountainous regions to alligator-infested swamplands. This also nicely matches the dual America/Mexico setting of the first Red Dead Redemption.

If Rockstar are sticking with a single locale as they traditionally do for Grand Theft Auto, then our bet is something inspired by either Montana or Wyoming; they are both inland western states with a mountain region, which matches the journey the gang are apparently undertaking. While these states are actually in the north, Rockstar will have relocated their geography much closer to the south, since several scenes feature plantation houses, and the bayou swamp areas are far more characteristic of places like Louisiana. Plus, if the rumours of the original map being part of Red Dead Redemption’s expanded world is true, then we will be revisiting the Texas-like New Austin.

Stealth could be important 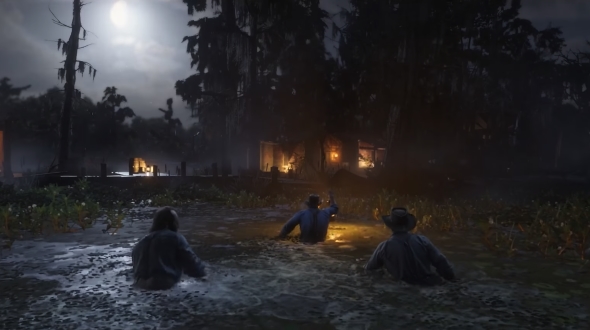 Talking of that bayou scene, the events there appear to suggest that stealth will be important, at least in certain missions. Three members of the gang can be seen sneakily wading through the swamp under the cover of darkness, with the trailer then cutting to a stealth takedown attack with a knife. There are also plenty of shots of gang members using bandana masks to conceal their identities.

More recent Grand Theft Auto games have featured rudimentary stealth, so it doesn’t seem out of the question for Rockstar to develop that style of play further, especially when it comes to ambush heist tactics. 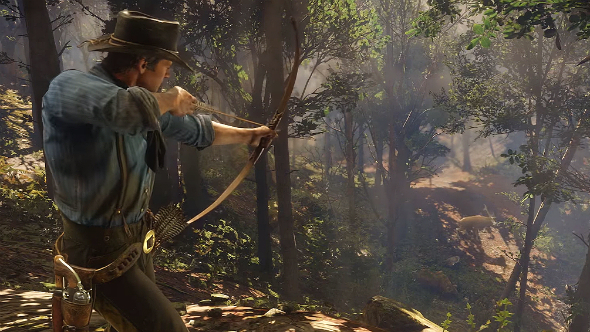 We never doubted that hunting would be a part of Red Dead Redemption II; it is such a key component of the original. But the trailer certainly confirms that it will be back, with some interesting wildlife to boot. As previously mentioned, the swamp areas appear to be filled with scaly beasts (perfect for a new set of boots), and Morgan can be seen readying a bow and arrow for a silent hunt.

… and horse breaking, too 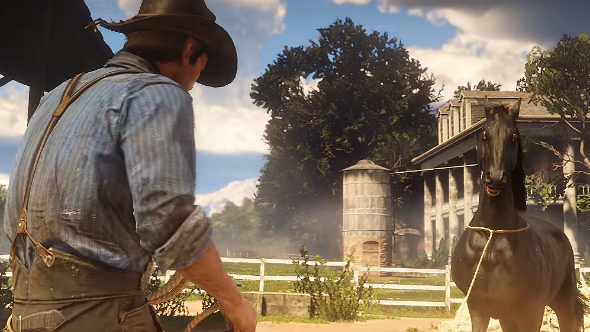 This is another feature that was practically confirmed by the mere existence of the game, but it looks like horse breaking will return, if the trailer is to be believed. Morgan can be seen lassoing a horse, so expect a mini-game for taming wild mustangs. Yeehaw!

That’s everything we spotted in the trailer, but did your eagle eyes notice any further details? Let us know in the comments.