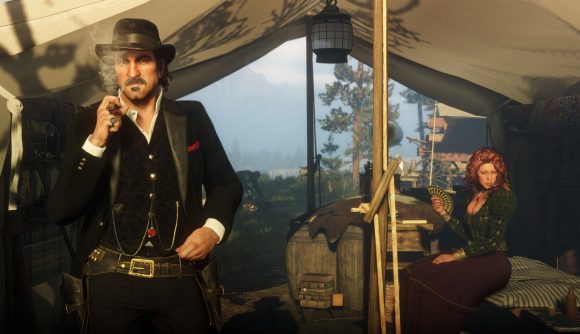 Red Dead Redemption 2 is a massive game, made by a massive group of people, over a massive span of time. A comment from studio co-founder Dan Houser suggested that the team was engaged in some massive overtime, too – work weeks over 100 hours multiple times this year. Houser has since clarified that this only applies to certain members of the senior development team.

“After working on the game for seven years,” Houser says, “the senior writing team, which consists of four people, Mike Unsworth, Rupert Humphries, Lazlow, and myself, had, as we always do, three weeks of intense work when we wrapped everything up. Three weeks, not years.”

In the full statement provided to Kotaku, Houser says ‘More importantly, we obviously don’t expect anyone else to work this way.” Some “senior people” do put in long hours, though Houser says “that additional effort is a choice, and we don’t ask or expect anyone to work anything like this.”

Houser adds “lots of other senior people work in an entirely different way and are just as productive – I’m just not one of them! No one, senior or junior, is ever forced to work hard. I believe we go to great lengths to run a business that cares about its people, and to make the company a great place for them to work.”

This response comes after Houser said “We were working 100-hour weeks” during an interview with Vulture. That comment isn’t expanded on in the original article, but with the state of crunch in the game industry it raised more than a few eyebrows – and is continuing to do so even after Houser’s clarification.

Lengthy overtime – colloquially known as crunch – has been an unfortunately long-accepted practice in the game industry, but many have been pushing back in the past few years, including pro-union organizations like Game Workers Unite.

But this is far from the first time that the industry has faced internal criticism for its working practices. In fact, the original Red Dead Redemption was at the center of the Rockstar Spouse controversy, which alleged that the company mandated six-day, twelve-hour work weeks for months leading up to that game’s launch. Crunch is increasingly seen as unacceptable in the industry – hopefully this will lead to improved working conditions across the board.