Looking for a list of Red Dead Redemption 2 weapon locations? If you’re looking for the weapons that can’t be purchased from the local town store, or those that you’ll pick up on your journey through the main campaign, then we’ve boiled down all the rare weapons that you’ll only be able to find in out in the wild west.

All of these rare weapons in RDR2 can be found either in specific locations, or by completing certain side quests in the game. We’ve listed all the places you’ll find the weapons, along with the side quest you’ll need to keep an eye out for.

This guide to all the rare weapon locations in Red Dead Redemption 2 contains spoilers, so if you want locations, areas, and certain quests to stay a surprise, then make sure you’ve unlocked the entire map before reading. We’ve also listed the weapons you can only find in the epilogue and the guns you acquire here do contain story spoilers. If you’ve not reached that point in the game yet, be sure to check back once you do. Oh, and finally you can actually view the whole map right from the start of the game if you’re happy to activate RDR2 cheats.

In the first chapter of RDR2 you’ll find a side mission called ‘The Noblest of Men, and a Woman’. To find this side mission head to the saloon in Valentine and you’ll find a very drunk Jim Boy Calloway passed out on the bar and a desperate Theodore Levin who’s writing Calloway’s biography. Levin will give you the task of collecting photographs of all the legendary gunslingers Calloway’s met for the biography. This will lead you to Flaco and his revolver.

In the side mission ‘The Noblest of Men, and a Woman’, the next gunslinger on your list is Emmet Granger and once you’ve tracked him down and after some pig shit shovelling, you’ll get his revolver.

Midnight’s Pistol is part of the side mission ‘The Noblest of Men, and a Woman’, you’ll find Midnight hanging out near Rhodes train station.

The final part of the side mission ‘The Noblest of Men, and a Woman’, is finding Calloway himself. This part of the mission doesn’t unlock until Chapter 4 and only once you’ve collected pictures of all the other legendary gunslingers in this mission.

This revolver is a reward for completing the side quest ‘Duchesses and other Animals’, which is unlocked once you complete the main story mission ‘A Gilded Cage’ in Chapter 4. The quest giver is Algernon Wasp who can be found in a greenhouse of a large blue house north of Saint Denis.

If you head east of Calumet Valley, just east of the Wapiti Indian Reservoir, you’ll find a broken target resting against a pillar. This RDR2 weapon can be found wedged in the target.

A small island appears south of Saint Denis, use a boat to access it and in a small ship wreck, you’ll find this RDR2 weapon. 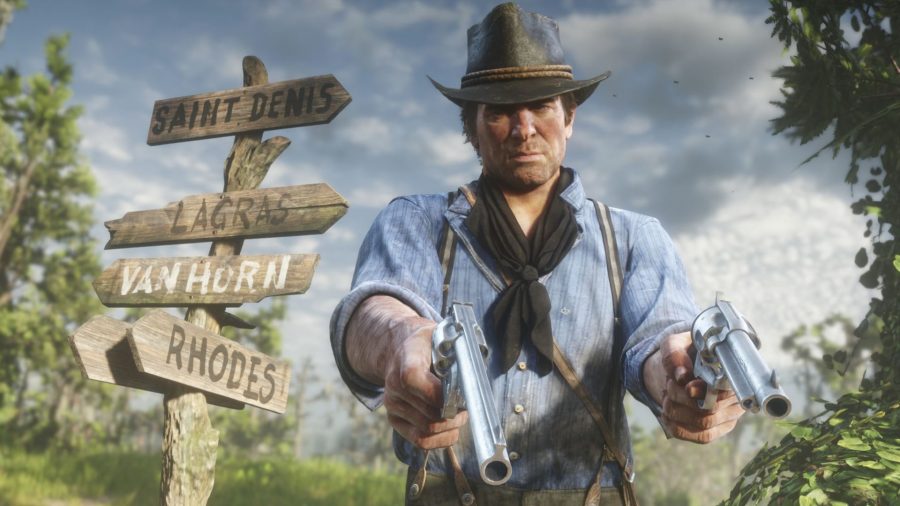 South west of Van Horn you’ll find Fort Brennand. Head into the fort and there’s a small building, climb down the ladder inside and in the basement you’ll find the Civil War Knife.

West of Mount Shann is the Beryls Dream Mine, you’ll need to blow up the mine at the southern point, you’ll find the knife stuck in a corpse inside the mine.

There’s a massive dead bear northwest of Hanging Dog Ranch in among the trees. Don’t worry, it’s definitely dead, and you’ll find this knife sticking out of it.

To the west of Fort Wallace and just below Window Rock is a small wooden cabin and a tree stump with the Hunter Hatchet.

Find Moonstone Pond southwest of O’Creagh’s Run in the east Grizzlies. South of the pond is a wooden cabin crushed under a fallen tree and an old campsite. Is a small tree stump and the Hunter Hatchet.

Head to Annesburg and at the top of the town, slightly north of the coal mine, you’ll find a small tree stump and the Rusted Double Bit Hatchet resting on it.

Just west of Annesburg, northwest of Elysian Pool and to the east of Three Sisters, you’ll find a small tree stump next to a wooden cabin. Resting on the tree stump is the Rusted Hunter Hatchet.

Found in a grave north of Annesburg, just below Roanoke Valley on the map. Sticking out of the grave scattered with skulls is the Viking Hatchet.

Head northwest of Wallace Station and you’ll find a small cabin and a tree stump, sitting on top of the stump is the Double Bit Hatchet.

After you’ve completed Epilogue 2, you can return to Mount Hagen and pry the revolver from Micah’s frozen corpse.