Reign of Kings is a Medieval-themed survival game that washes you up on a beach, nearly naked clutching only a wooden stick, and asks you to travel through its forested world whilst attempting to not die of thirst, hunger, dog bite, or sword-to-the-face. If this sounds strikingly familiar, it’s because you’ve played Rust, DayZ, 7 Days to Die, or one of the other many games it lifts most of its core mechanics from. Reign of Kings is yet another crafting-based exercise in frustration, that somehow is selling in its thousands.

Let me tell you some tales of my time in Reign of Kings, a game so buggy it belongs in the Arthropod section of the zoo. Also: a game that lets you hide stones up your arse. 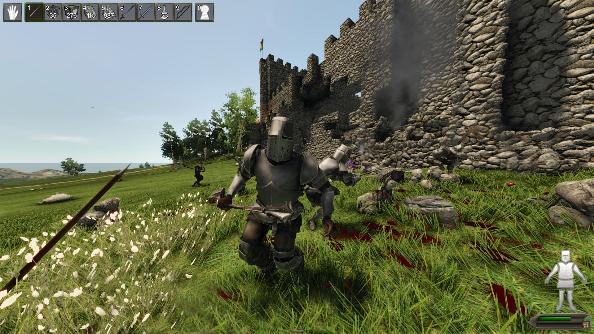 We expect that a game in Early Access is going to be buggy; most games in the system are in alpha stage of development, and so barely more than coded foetuses. But Reign of Kings takes the bug threshold and runs with it. It’s near impossible to experience any of the ideas the game has, since at every turn the game is collapsing beneath you. Here are some tales from my time with the game:

When designing my peasant in the game’s surprisingly detailed character creator, I managed to die. One moment I was pulling sliders from left to right to give my chap a perfectly round pot-belly, the next I collapsed dead in a heap on the ground. I have no idea why. He proceeded to float off on a raft.

After spawning on the beach I was unable to move. I checked to make sure I had feet, and they were certainly there. They just didn’t move. A man threw a javelin through my chest and I died. 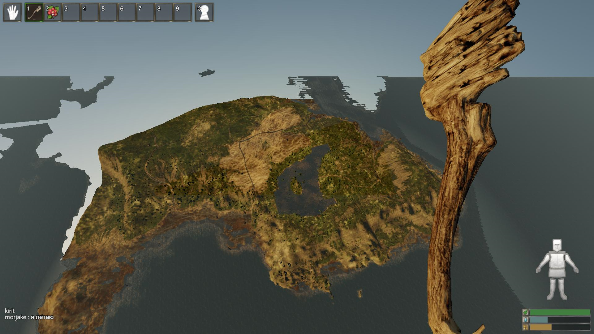 After discovering how the crafting system worked, I gathered enough wood and flax seeds to build a piece of chest armour. As the crafting bar reached 100% complete, I was launched 1,000 feet into the air. On the way up I crashed through the canopy of a forest, which severely hurt me. After reaching cloud-height I suddenly stopped, and remained suspended in the air for several minutes. I discovered that walking backwards fixed this case of anti-gravity, and I swiftly fell back down to the ground, smashing against a mountain side and slowly sliding down in a trail of smeared blood.

Whilst on a leisurely stroll through the game’s leafy wooded regions, I was without warning teleported to a beach where four nearly naked men were attempting to club a knight in plate armour to death. The sand was heavy with pools of jam-like blood, and the knight successfully ran them all down, before thrusting his sword through my head.

Attempting to go on yet another hike in search of materials, I was teleported once more to a fight. This time I was locked in a dungeon-like stone room where the same knight (or someone suspiciously like him) proceeded to butcher another group of nearly naked men. 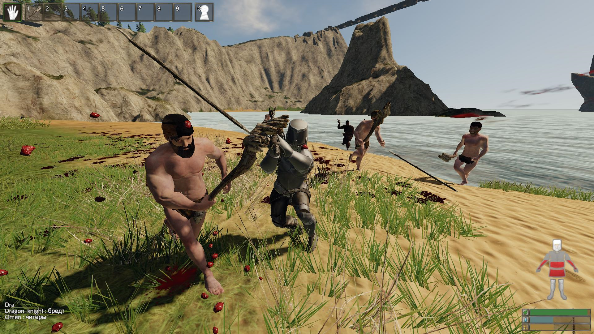 So yeah, you could say Reign of Kings is as riddled with bugs as a barrel of maggoty ship’s biscuits. But if you’re the kind of person who’s willing to endure such an unfinished product for the sake of the potential that lies within, is Reign of Kings worth sticking with?

No. Absolutely not. The survival genre is fundamentally flawed in that after you’ve done all that faffing around chopping down endless trees to make a sword, there’s not much to do other than hurt other people. Reign of Kings really embraces this. You can chain unfortunate players up, drag them to the gallows, and hang them from the neck until death. You can place their necks on chopping blocks and call down a guillotine. The whole aim of Reign of Kings seems to be becoming the most nefarious shit on the server. If that’s your idea of a good time… well I’m pleased I don’t play games with you.

If you’re the victim of the most nefarious shit on the server, you do have options. You can hide a sharp stone up your bum, and then pull it out after you’ve been tied up. Use the sharp stone to cut through the rope and you can peg it away from the gallows. Better-equipped executioners may lock you in metal shackles, which you can’t cut through with your sharp stone. Thankfully you can use the stone to repeatedly bash your own skull until it caves in, which takes ages and… well… is kind of the same thing as getting executed, really. 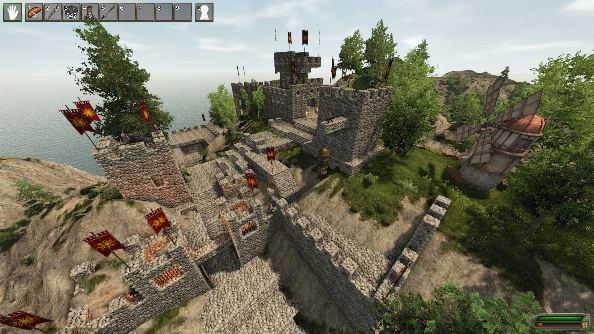 If you’re really successful at being all hard and nasty, you can take over the Ancient Throne, which makes you king of the server. As a reward you get a bloody big sword, and everyone on the server has to pay you taxes (everything they harvest from the world is deducted by a percentage of your chosing and sent to your special private lockbox). So being King should be all well and good, especially if you check out the trailer. It promises to allow you to take a kingdom to war against other guilds, destroy their battlements with bloody huge trebuchets, and storm their gates alongside allies.

But this is a survival game, and the majority of players keel over from thirst before they’ve managed to sharpen their first stick. The combat is clumsy and painful, lag spikes constantly bombard the action, and framerates manage to hover around the unplayable. Most servers don’t support enough players to allow the epic guild vs guild warfare the developers want, and even if they do most players are still going to be squabbling in the dirt like baboons, beating each other’s skulls in for a slice of meat rather than banding together to achieve a goal that will take dozens of in-game hours to achieve. The ambition of Reign of Kings is admirable, but the execution is dire and the servers are populated by the same types that are in every survival sandbox. Unless something drastic changes, Reign of Kings is doomed to fail.

At least the map is kinda nice.