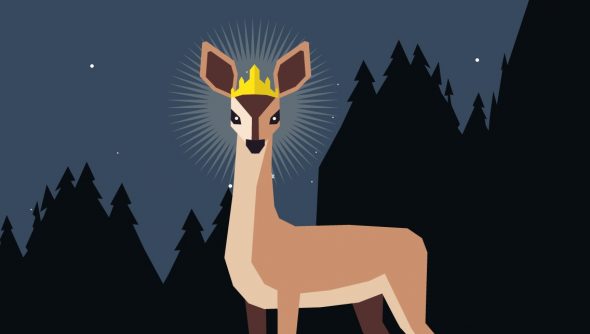 Originally released for smartphones and later finding its way to PC, Reigns was one of the more unusual surprises last year – a surprisingly compelling game of medieval politics and leaderly juggling, wrapped up in the interface of Tinder of all things. As advisors lined up, you swipe left or right, and watch as the heads roll and your kingdom (hopefully) prospers. Today, developers Nerial announced the sequel; Reigns: Her Majesty, to be published by Devolver Digital.

It’s good to be king (or queen), so here’s 15 of the PC’s finest strategy games.

This time around, you get to take the role of queen of the realm, stepping up to rule after the untimely demise of the king. Rather than just reprise the events of the first game with the pronouns switched, you’ll get to wrangle your land and its people through an entirely new scenario penned by games critic turned games writer Leigh Alexander. The tone, as in the original, seems to lean towards brevity and snark, but with a bit of critical edge.

As seen in the trailer, you’ll get to deal with an entirely new set of advisors, allies, and enemies. From grovelling chamberlain Bartholomew de Croquille, to a fussing doctor intent on preserving your bloodline with as many heirs as possible, religious leaders intent on keeping your rule as theologically orthodox as possible, and the Baroness of Reeds, who helpfully insists that the path to success is just to smile, and keep smiling, up to and including when they carry your head through town atop a pike.

While no firm release date has been pinned down, Reigns: Her Majesty is coming to PC, Android, and iOS later this year.