Doom, the shooter that kickstarted the FPS genre, turns 20 today. For two decades we’ve been thrilled by its action, chilled by its musical score, and sworn ‘till we’re blue whilst suffering its difficult boss battles. Doom’s legacy runs on today in any shooter you care to play, but today is not a day for those shooters. Today is Doomsday, so we thought we’d best do something to celebrate.

This is the tale of eight PCGamesN staffers, and how Doom changed them. For some, it was the origin point of their career. For others, it was a memorable early-years trauma. Oh, and one of us didn’t even play it until it was re-released on iOS in 2011.

These are our stories. This is Remembering Doom. 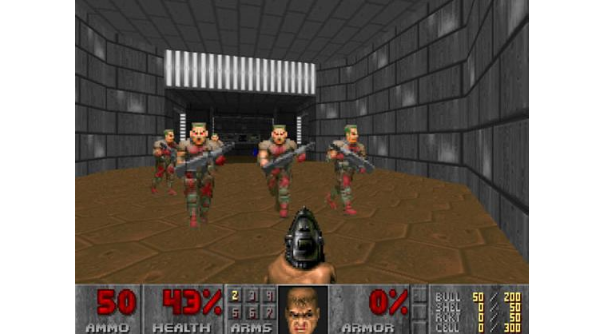 James: I was working as staff writer at Future on a Nintendo magazine called ‘Total!’ My Editor was Frank O’Connor (now of Bungie fame). My day job was reviewing crap like Jurassic Park on the GameBoy, but I snuck into the PC Gamer and PC Format offices to play – they had all the good gear. I remember the first time I saw it. I felt that this was the new zenith – that games simply couldn’t get much better. I’d been a huge Wolfenstein fan, but this was genuinely chilling and thrilling. A single game channeled my career. I started freelancing for PC Gamer and by Spring 1994 moved to be the games guy on PC Format. The PC master race had arrived and I wanted in.

Tim: Every two months, a local community hall would host a travelling computer show – a place where you could go and pick up cheap(ish) computers and games from men (and they were invariably men) displaying their wares on sagging trestle tables. It was a paradise for a young nerd. The games they used to show off what the PC could do weren’t exactly striking. Wing Commander was one I remember. Crusader: No Remorse was another.

Then Doom happened. I didn’t even know it had been released. But walking into Trentham Garden’s main hall was like walking into a batshit combination of LAN party, community faire and cheap day out for the kids. Soundtracked by hundreds of screaming zombie soldiers, cacodemons and hell knights. It was incredible. I bought it immediately.

And then discovered that it would only run in a tiny postage stamp sized window on my parents 286. PC gaming. 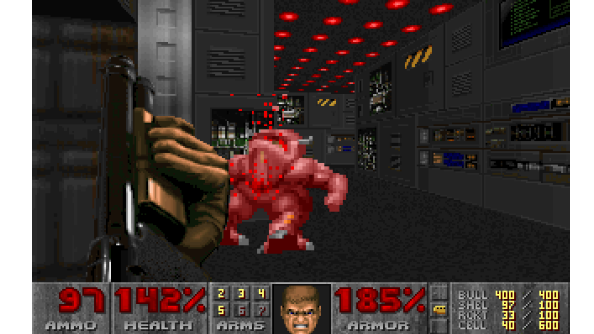 Julian: The only time our school filled a room with 13-year-old boys working together was when we’d descend on the IT department during lunch. It wasn’t some planned thing on the part of the school, we were forever trying to find games simple enough to run on the hand-me-down machines that were at least five years out of date when the school had bought them. DOOM fit the bill better than any other.

Not only did DOOM run fast, it had multiplayer. For that alone it trumped Elastomania and N the Ninja. We’d split into groups to make runs at Knee Deep in the Dead and for 40 minutes each day the computer room was punctuated with the sounds of Demons and Hell Knights being shotgunned into giblets.

Jeremy: I remember first playing Doom as if it was yesterday. In fact, it was two years ago, because I am a machine sent from 1990 to make you feel old. Like Tim, I played it on a teeny-tiny screen, but mine belonged to an iPod.

What struck me most about it was its geographical honesty. Where contemporary shooters are content to throw in debris or, failing that, invisible walls to funnel the player from Here to There, Doom is happy for you to see the seams and run up against the boundaries.

The consequence of that is that id got to play with those limits: just as you think you’ve got the measure of a place, a monster closet will prove you fatally wrong. And while there’s no jump key, a well-timed run up a ramp can see you clear a chasm. It’s odd to realise that Doom did more with verticality without a Y-axis than most of its genre mates do today.

(Ed – It appears we accidentally hired a fetus) 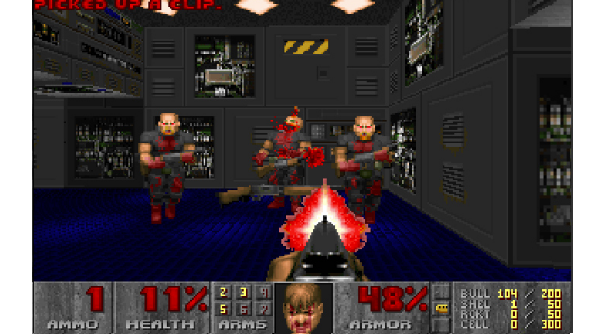 Pete: I don’t know what sparked the decision but I remember my dad telling us he was going out to get some memory. He’s sourced some cheap RAM from what I remember as a hobbyist in his house. It was around £30/Mb.

My brothers and I got very excited. Those two little computer boards were keys. Owning a 386DX with 4Mb of RAM unlocked games that used DOS4GW. That meant Theme Park. xxxx And Doom.

But there was final boss that had to be defeated before we could play on this new powerhouse of a machine. Autoexec.bat and config.sys

In the early 90’s memory was a precious thing. Games were meant to be squeezed into the 640k of conventional memory. DOS4GW allowed you to use some extended memory to boost this but you still needed to maximize your free memory. That meant assigning some XMS to smartdrv to boost performance. That meant moving the mouse driver into the right partition. It turned us all into programmers.

I can’t remember much after that.

Matt: Doom is single-handedly responsible for me refusing to play shooters until Medal of Honor Allied Assault. My memories are not the fond tales of my colleagues, but nightmares and pure fear. When I was seven years old I stayed over at a friend’s house. He had quite irresponsible parents. It wasn’t long until he tired of the tame games I wanted to play and he flicked through his collection of floppy discs and drew out his holy grail. Half an hour later I was traumatised. I’d never seen anything like Doom before. Heck, outside of scraping my knees I’d never really seen blood before. But whilst the violence had my eyes wide as my friend decorated the floor with buckshot-mutilated corpses, it was the noises Doom made that really give me the heebie-jeebies. You could hear things behind those doors; a guarantee that even though you didn’t know what awaited you, something was definitely there, and it would definitely try and rip you to pieces.

Several sleepless nights followed. And I swore off shooters for good. 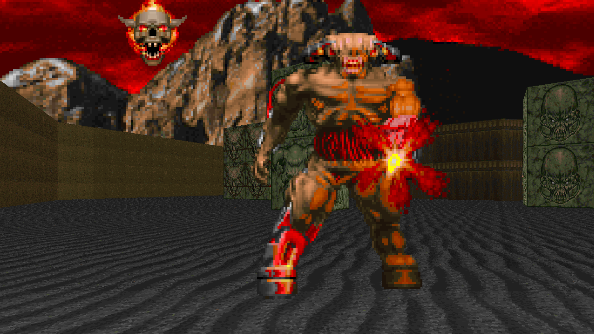 Actually, my dad did, but it didn’t feel like piracy. He was talking with one of his English students about the shareware version of the game he and I had both been playing, and the kid got reallly excited. “You gotta play the full version. Hang on, I can make you a copy.” Like trading tape cassettes. (You wouldn’t know about those, Jeremy. They were like iPods with wheels.)

Anyway, we both loved playing Doom and, each time we did, we ignored the “Hey, buddy, did you actually PAY for this game?” message that displayed on exit. Yeah, stealing was terrible, but it’s not like we’d stolen Doom. A friend had a copy lying around. To be fair, id got revenge on us with our launch-day purchase of Doom 3.

Doom also altered the trajectory of my life. Before Doom, I was a pretty good student and occasional console gamer. But Doom was the game that I’d be trying to play before I went to to school, it was the game I was thinking about during classes, and it was what I’d race home to play. It was the beginning of an obsession with computer games. Nintendo didn’t have games like this, and certainly didn’t have versions that could match the PC. Until I went to college years and years later, I never really did put anything before games. School was something to do in my spare time.

There were a lot of things that scared me about Doom, but I don’t think anything ever matched the sheer menace of the first encounter with the Cyberdemon. It was such an an unexpected change. Until then, I’d thought the Hell Knight was as bad as things could get, and there was always somewhere to run to. The Cyberdemon level was a duel to the death where I felt like I was being hunted down by an enemy I could not actually hurt. The music was eerie as hell and as sparse and fearful as the map itself.

Because the Cyberdemon was so strong, I started to wonder if my rockets were having any effect at all. The entire experience was the classic nightmare of being pursued by something you could neither outrun nor destroy. Eventually, I got so frustrated I reloaded a save from a couple levels earlier and hoarded all my plasma rifle ammo. Then, when I encountered the Cyberdemon, I simply plasma-fried the ever-living hell out of him. I’m not sure I’ve ever enjoyed watching an enemy fall as much as when the Cyberdemon exploded in a puff of blood and gore.

Steve: When I was six years old I used to think my dad worked at the job centre. Sometimes I’d go there with him and he’d show me the shareware games that he and other bored jobseekers had installed on the communal PC, one was Wolfenstein 3D and another was Doom. Even my six year old idiot brain could tell Doom was a generation ahead of its Nazi-mad forebear, but it’s hard for a game to properly scare you when you’re surrounded by people picking up their dole money. It wasn’t that I thought the harsh reality of unemployment was more terrifying than a mancubus chasing me around a pool of lava, I just found people scary.

Anyway, it didn’t take my dad very long to find a job because he’s ace my dad is. And luckily his new job gave him, and by extension me, access to a computer capable of running Syndicate, which is a way better game than Doom. He also used his work printer to print out a 200 page Donkey Kong Country walkthrough, as long as I’m listing his workplace transgressions.

Hold on, I vaguely remember telling this story for Wolfenstein 3D’s birthday too. Oh well, turns out all of my memories of early PC games are thanks to the welfare state.

Those are our stories, but what are yours? Doom is responsible for shaping the PC scene so much, almost everyone has a Doom story. Tell us your tales – through prose, poetry, or song – in the comments.