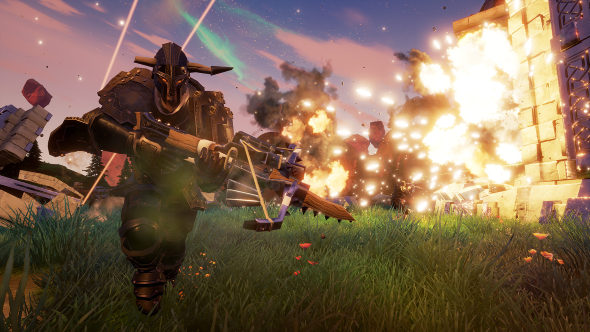 A trio of developers who met 15 years ago working on the original World of Warcraft have set up a new indie studio and announced their first game. Frostkeep Studios will launch Rend, a fantasy survival game, on Steam early access this spring.

Need to gather food right now? Try one of our favourite survival games.

Rend is a survival game in the vein of DayZ and Rust, but with a fantasy theme. We’re talking magic, castles, direwolfs, and all the trimmings. But, unsurprisingly considering the talent, the game will also have RPG elements.

Like the Horde and the Alliance, players will align themselves with one of three factions before starting a character in Rend. These three factions will be locked in battle as part of a competitive race towards ‘ascension’. Rival players will play the role of the enemy, but the world is also full of aggressive creatures to fight.

Like survival games, crafting and bases will be be a large part of the game. Exploring the world will provide you with resources to use in the forging of more powerful weapons and armours, but you can also tailor your character with an RPG-like skills system.

Solomon Lee, Mat Milizia and Jeremy Wood are the ex-WoW devs behind the project, and Overwatch composer Neal Acree is also onboard to help.

The game will launch in the spring on Steam with a large selection of features already completed, including base building, FPS combat, raiding, AI invasions, mounts, and a skill and talent tree. Over a 6-12 month early access period Frostkeep hope to add more creatures, weapons, building pieces, cosmetics, and siege weapons, as well as the ability to dye armour and modify weapons. Overall it’s very much a melting pot of survival and RPG philosophies, which is apparent even in the game’s art style.

Is this Warcraft-like spin on the genre the step in the right direction survival games need right now? Let us know if you think Rend has a bright future in the comments.