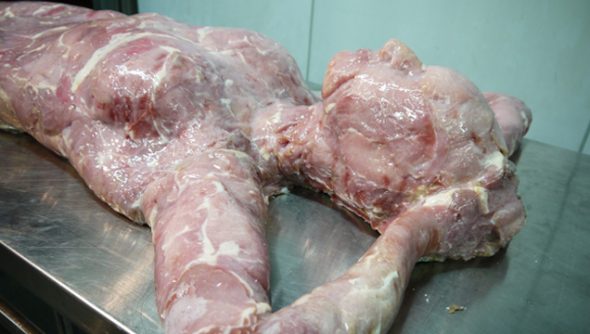 A four-year-old Resident Evil PR stunt has resurfaced these past few weeks. The stunt reshaped animal meat to look like people, and these photos have since been used as ‘proof’ that China has been selling human meat branded as corned beef to Africa.

If you ever feel like getting off this idiotic planet, why not try our list of the best space games.

The rumours seemed to originate from a Facebook postfrom a Barbara Akosua Aboagye, who says: “Please send this to all your contacts, it’s very important. Chinese people have started producing corned beef with their dead bodies and sending them to Africa. Please stay away from corned beef irrespective of brand, most especially in Africa and from Afro-Asian grocery shops.”

Some photos from an old Resident Evil PR stunt is all the proof people needed, and the post has been shared over 26,000 times. Worse still, African media reported it is fact, with South African websites Msanzi Live and Daily Post even speculating that China was running out of room to bury its dead, due to overpopulation – via the Independent.

The accusation gained so much steam, in fact, that the Chinese government has been forced to respond. “Today a local tabloid newspaper is openly spreading a rumour, claiming that the Chinese use human meat to make corned beef and sell it to Africa,” said a Chinese Ambassador to Zambia Yang Youming.

“This is completely a malicious slandering and vilification which is absolutely unacceptable to us. We hereby express our utmost anger and the strongest condemnation over such an act.”

Zambia’s deputy defence minister has also weighed in: “The government of Zambia regrets the incident in view of the warm relations that exist between Zambia and China,” said Christopher Mulenga. “We shall make sure that relevant government authorities will take up the investigations and give a comprehensive statement.”