What are the tropes you associate with the world of horror games? We’d wager that jump-scares, the undead, and the odd steamy sex sequence (which entail two lifeless mannequins rubbing up against each other) all feature. But something that doesn’t get mentioned as often is the genre’s unique ability to evoke in us a frisson of fear from being chased.

In the last several years, developers have increasingly been experimenting with games as /dis/empowerment fantasies, rather than simply empowerment ones. This ranges from the cold-sweat horror of a jawless monstrosity breaking down the door in Amnesia, to the despondent dread when a xenomorph hisses in your ear in Alien: Isolation – and the subsequent knowledge that, even though you are running away out of sheer animal instinct, you are almost certainly screwed. Here, we pay tribute to the most thrilling, giddy and anxiety-inducing chase sequences in games.

If getting chased by something horrible is what you love, check out the best horror games on PC. 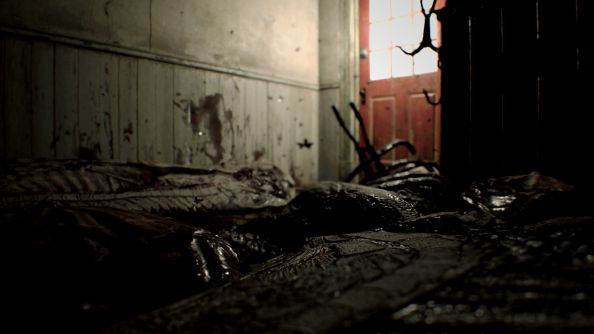 Resi 7 reset the gauge for Resident Evil, returning the series’ themes and pacing to the slower horror of the original games (Resident Evil 7? More like Resurgent Evil 7, am I right?).

With its narrow field of view and agonisingly slow running speed, Resi 7 has been tweaked in every department in order to heighten the claustrophobic terror of your close encounters with the murderous Baker family. But in the spirit of ‘first time’s always the best’, none quite match up to that initial, harrowing dance with Papa Bear Jack, as he bears down on you with his woodcutting axe. Taking a page from Jason Voorhees’ Guide to Intimidation, he strides rather than runs, marching at you with deceptive speed while barking deranged threats and complaining that you didn’t eat your dinner – a slimy plate of nourishing zombie-slugs.

In one of several shocking events throughout the game, Jack may even smash through the wall into a narrow corridor to get at you, making you wary from that point on that the space around you can be shattered by your pursuers to their advantage. You can escape through a hatch in the floor, but to do so you need to use items in your inventory /without pausing the game/. It is a wonderful, panic-inducing sequence, epitomising a game that shows Capcom do remember how to make horror games after all. 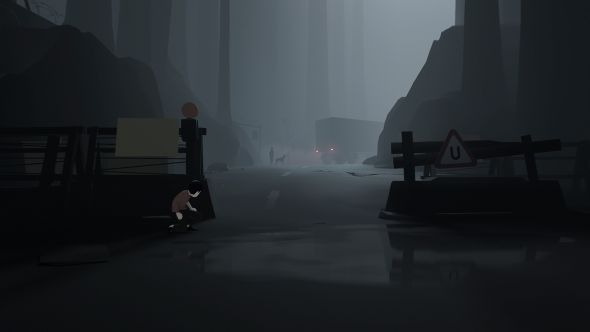 Picture the scene. You’re jogging through the dingy, nightmare world of Inside when off in the distance you see a silhouetted man restraining a burly dog on a lead. Suddenly, the snarling beast is unleashed, barking ravenously as it charges towards you in a circuitous arc, buying you a little time yet heightening your horror as you run – NOT FUCKING FAST ENOUGH – for the fence ahead.

Your lack of depth perception as the creature bounds from the background and into the fore incites alarm. That moment when it tears through the invisible barrier onto your 2D plane, and the crunchy, flailing physics as it tears you apart (that are slightly different each time, ensuring you never quite acclimatise to the horror of getting caught) make this one of many intense moments in Inside that prove the Thrill of the Chase isn’t restricted to first-person games.

Equally thrilling are encounters with the long-haired creatures found in the submerged office blocks and industrial ruins. They’re a cross between mermaids and creepy ghoul-girls seen in Japanese horror movies. What amplifies the fright they bring is how they only stalk you when you’re not looking directly at them. This means you get to decide when to turn on the tap of terror during the game’s murky underwater sequences. Thalassophobes, be warned… 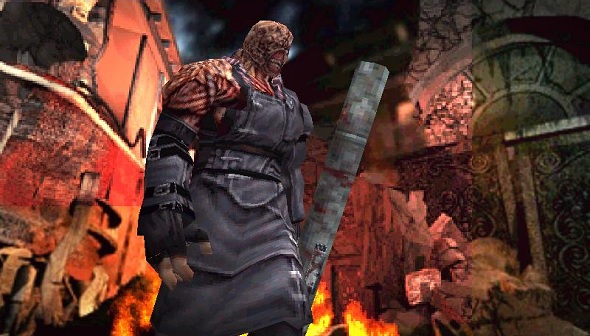 Having come out in the dark ages, when the best console releases would rarely make the jump to PC, credit should go to the three original Resident Evil games for making the intrepid journey to our platform of choice when it wasn’t cool to do so.

Resi 3 didn’t accomplish much that its predecessors hadn’t already, but it had one bold and skin-crawling hook – the Nemesis creature that chases you through much of the game. The locations where the big guy could appear were pre-defined, but also dependant – to an extent – on whether you chose to fight or flee, throwing in an element of unpredictability.

Also, modern games are yet to come up with a mechanic as fear-inducing as tank controls. A core part of the original Resi games, tank controls make even a 180-turn away from your pursuer a lengthy ordeal that could well be the end of you. Bad design that makes you helpless can actually be good design in the realm of horror games, it turns out. Whether this decision was ingenuity or madness-gone-right on Capcom’s part remains an enigma – like Deadly Premonition, or Tommy Wiseau. 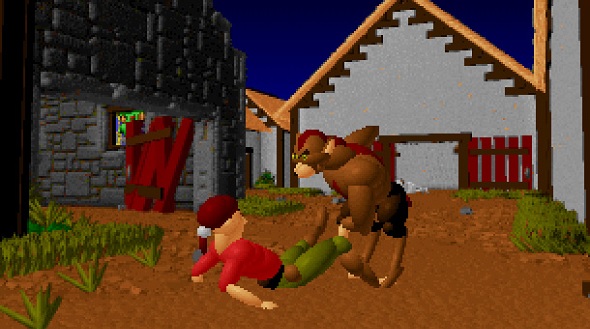 If you grew up booting in DOS rather than Steam, you might remember this little Andrew Spencer Studios gem. Rendered in never-quite-fashionable ellipsoids, this Psygnosis-published horror game features not one, but severalrelentless pursuers.

Chief among them is the werewolf, who is made to appear like he is stalking you throughout the town in which you find yourself at the beginning of the game. He’ll pop out at unexpected moments and eviscerate you if you don’t turn tail and run, or set about the arduous task of inflicting enough damage to permanently kill him. Any injuries you cause will show up in his matted, bloodied fur, but he will heal over time – the most sensible course of action whenever he appears is to bugger off sharpish.

As if that wasn’t bad enough, when you venture outside of the town, there are minotaurs to deal with. While not quite so aggressive, they are just as strong when provoked and will bloody up your oval little face in short order.

Not so much a stand-out chase sequence, then, but a pervasive sense of being in danger and unable to lower your guard. It is tiring, traumatising, and brilliant – a remarkable forerunner to Alien: Isolation’s sadistic brand of harassment. 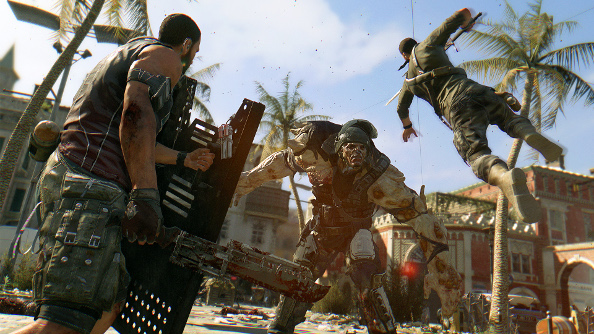 Following an ill-advised pistol shot in the night, you find yourself fleeing a rabid and rapid zombie horde. Looking ahead, there’s a sledgehammer zombie blocking your path, forcing you into the split-second decision to kick through the door next to him, leap through a back window, and then springboard off an aimless zombie’s head to grab onto a roof ledge and climb up.

You sprint across the rooftop, drop-kick a shambler in your path, then take a leap of faith off the other side, landing softly in a pile of rubbish bags (lucky for you, the denizens of Dying Light only seem to throw away unwanted pillows and duvets).

There are a thousand variations to this scenario in Dying Light’s open world, each worthy of a YouTube highlight reel.

Where the positioning of crates, launchpads, and ledges in fellow parkour-fest Mirror’s Edge feels deliberate, Dying Light makes you feel like you’re improvising moment by moment to find the optimal path and escape the screaming hordes. Creating a free-flowing sense of momentum and movement is tough to get right in first-person games (just ask Adam Jensen), but Dying Light pulls it off with leaping-and-bounding colours. 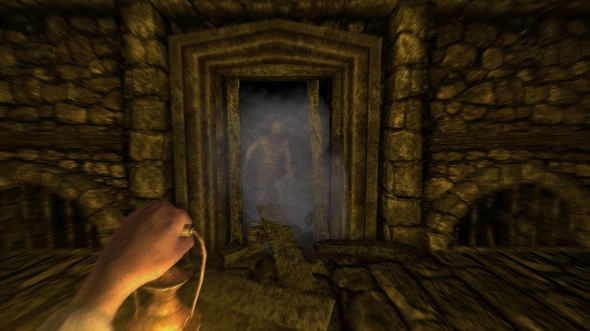 The game that redefined videogame horror may look a tad old these days, but its unique, fumbling mechanics help keep its chase sequences as suspenseful and jittery as they were seven years ago.

What makes Amnesia feel so tactile is that you use the mouse, rather than keyboard buttons, to interact with your environment. To open doors, you drag your mouse in the direction you want to open it (then do the same thing to shut it behind you and slow down your pursuers). To barricade doors, meanwhile, you need to grab whatever you can – drawers, stools, chairs – and pile them up. Sound simple? Try doing it when a nightmarish abomination is chasing you down, screaming at you through a corridor, threatening death on arrival.

This intentionally awkward system means that even when carrying out ostensibly simple actions, your nerves can work against you – you clumsily fail to close a door while being chased, you fall out of a wardrobe as you attempt to peek at the monster you’re hiding from. It’s the closest that games have come to capturing those moments in slasher movies when a sweaty-palmed teen fumbles to get a key into a lock as the serial killer bears down on them. 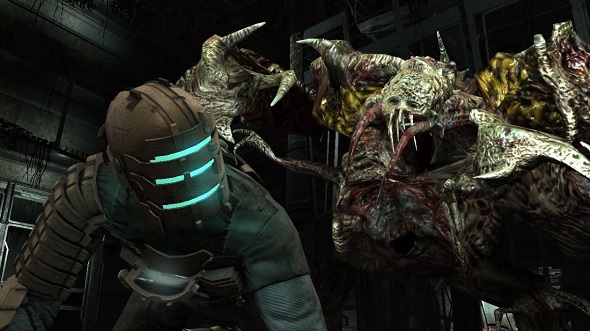 In gaming, mechanics and systems trump cinematics for the simple reason that the former traits are unique to the medium. But credit where it’s due: even though the only advice you’re given in the frenetic Dead Space 2 tutorial is ‘Hold Shift to Run’, and even though it is as rigidly scripted as a daytime soap opera, Visceral Games’ sequel is a viciously entertaining baptism of bloody bits.

The game begins with protagonist Isaac Clarke strapped up in a straitjacket and lacking the heavy machinery that will eventually let him carve necromorphs into meaty topiary. Your escape from a moon-based asylum begins with a doctor turning into a mince-faced necromorph right in front of you, and it doesn’t let up; semi-discernible horrors scurry across the screen to chase people down, and if you dare take the time to look (you won’t), you’ll see all manner of massacres occurring in the cells around you. The detail and pacing is perhaps overwrought, but it is a little more unpredictable and involved than the ‘run straight to get away’ silliness favoured by, say, The Evil Within.

Dead Space 2’s opening is a five-minute rollercoaster of running and quick time events that leaves you struggling to prise your shellshocked pinkie from the Shift button. 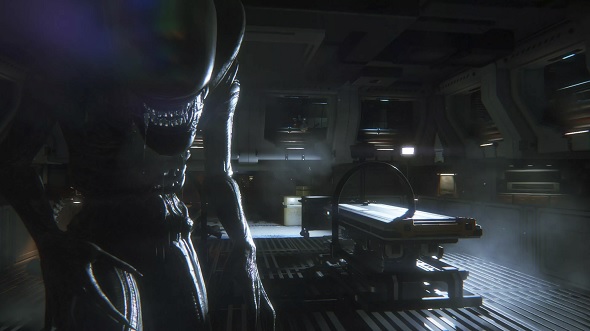 As established earlier, being chased by the titular extraterrestrial in this game is rarely a prolonged experience. Once you are spotted, and you hear that ominous shrieking hiss, you have a few seconds at most to lock yourself away behind a blast door – or, at least, hope that the beast gets distracted by other hapless inhabitants aboard the Anesidora.

Sound design plays a huge part here, with the alien’s thudding, yet inhumanly clicking, footsteps being your only gauge of how close it is behind you (crucially, your motion sensor doesn’t detect things in this blind spot). Oh, and possibly for the first time in any game ever, vents aren’t safe spaces, but instead superhighways for the alien to get around the ship.

Because the appearances of the xenomorph are mostly systemic rather than scripted, there is no settling into a pattern here, no way of gauging which vent the creature will jump out of. The only comfort you have is to look at your dread-inducing scanner – and even then its beeping will attract the xenomorph to your location. You shouldn’t sprint to avoid attracting the alien as it’ll hear that and punch a hole in your face. But, at the same time, you often need to sprint to get away from the walking menaces that are the Working Joe androids, making your traversal of the space station a constant balancing act.

I always said that the solution here is a pair of grippy stealth socks that you can put over your shoes, but no-one ever listened. Now they’re all dead…