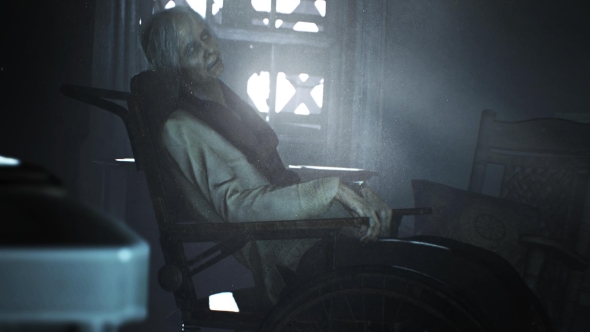 If you’re sick enough to have thought “I fancy some of that” after watching that there Black Mirror, Capcom are here to help you out. From January 20 to 23 they are organising a live experience in London that aims to recreate “the unsettling nature” of Resident Evil 7. Best of all for horror fans: it’s free.

Do the live experience, then play the best horror games on PC to further torture yourself.

The video above is a taste of what to expect (lots of jump scares and someone pressing a drama button, apparently). The experience takes inspiration from the story of the game and will last 45 minutes.

You play an investigative journalist intern, helping the production team of a paranormal TV show investigate a haunted house in London’s East End. Working as a team, you’ll have to solve puzzles and manage “unexpected interruptions” (so, jump scares) to figure out what’s happening in the house. Because a large group of people would be too comforting, it’s designed for pairs.

“We wanted to give fans a little glimpse into Resident Evil 7: Biohazard’s gameplay, bringing it to life and allowing people to interact with the game in a brand-new way, and perhaps even having a chance encounter with some of the game’s characters,” says Laura Skelly Capcom PR manager. “Playing on the idea of survival horror, we are really excited to see who will be able to escape the experience when it opens its doors to the public later this month.”

The experience is free for members of the public, with slots allocated on a first come, first served basis. If you’re lucky enough to get in, you’ll also be able to play a demo of the game ahead of its launch on January 24.

To book your slot and learn more, head to the dedicated site. Here’s Resident Evil 7: Biohazard on Steam.