The only thing frightening about Resident Evil 7 is, well, all the scares and grisly bits. Thankfully they’re all intended, as you can read about in our Resident Evil 7 PC review. But while we know the game is great, the verdict is still out on its performance. Is the game a technical mess, akin to a victim of the Baker family? Or is it as silky smooth as a river of blood? That’s what we’re here to find out in our port review.

Our port reviews are designed to offer you the broadest picture possible, using hardware of similar spec to what most gamers have. We test the game on all graphical settings using an i5 powered rig with 8GB of RAM, and try to hit 60 fps with four of the most popular graphics cards. Even if your specs are not identical to our set ups, you should still be able to assess what kind of performance you can expect. 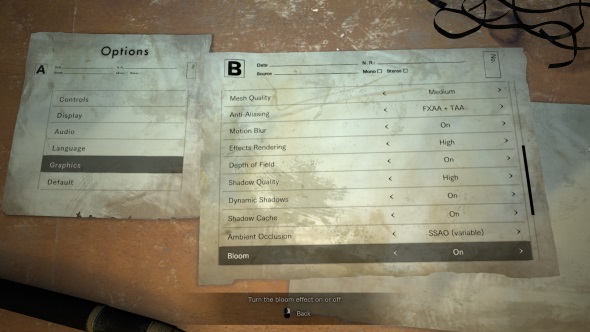 In Resident Evil 7’s graphics menu you’ll find 27 different settings to adjust in order to find the perfect balance. And you will have to find that balance yourself; unfortunately not one of these options is an overall graphics preset.

There’s plenty of control over quality though, with many settings offering five levels (very low through to very high). Texture quality and filtering, mesh quality, shadows, and effects rendering all offer the standard tools to manipulate visuals. The inclusion of more niche options like rendering method and resolution scale bring PC-centric features to the game; something we’re typically not used to in Japanese games developed primarily for console.

Anti-aliasing comes in TAA, SMAA, FXAA, and FXAA+TAA flavours, while ambient occlusion can be SSAO, SSAO (variable), or HBAO+.

There’s a v-sync on/off toggle and a frame rate limiter that can allow a variable rate, or lock in at 30 or 60 fps.

As with many games released recently, you won’t be able to adjust some of the graphics settings in-game. This requires quitting out to the main menu, and makes finding the ideal settings for your PC somewhat frustrating.

Typically with a port review we’d compare and contrast between the four main presets: ultra, high, medium, and low. Resident Evil 7 doesn’t have these, but you can easily create equivalents due to the majority of settings being categorised between very high and very low. Simply dial them all to the setting you wish to create, and turn off the effects settings as required. 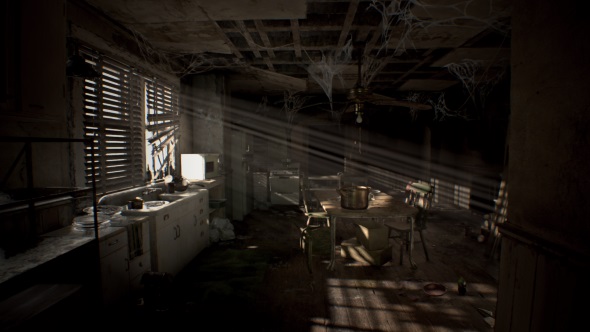 The grisly kitchen of the Baker mansion looks suitably spooky at ultra. Shadows look great, and the effects provided by the volumetric lighting make this scene look close to photorealistic. Just look at those rays filtering through the blinds!

It’s close up that Resident Evil 7 falters a little, though. Things look great at a distance, but when you press your nose against objects it becomes clear that they don’t have the world’s finest texture work. Surfaces can look slightly smeared, but it’s an effect that’s completely diminished when you step away. The texture streaming is a little hit and miss, too, meaning the hi-res textures can suffer from severe pop-in from time to time.

Thanks to great shadow and lighting work though, those issues are unlikely to severely hamper your enjoyment. In most cases, Resi 7 on ultra looks pretty good. It also performs well. Thanks to mostly being a game about walking through a house, you can expect to see above 90 fps. Heavy combat sections may pull this down several frames, but you’re still in for a smooth ride. 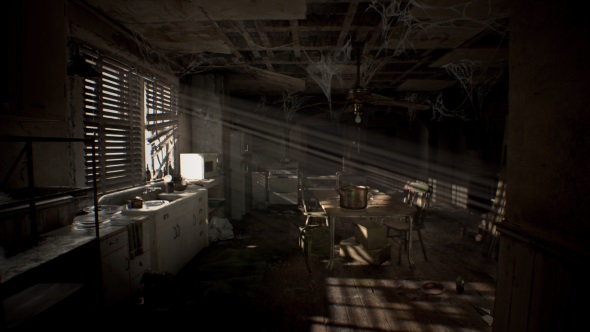 The same scene still looks great on high settings, but there have been some minute sacrifices. It’s all in the shadow work; while the kitchen floor still looks identical, the drawers on the left no longer casts a shadow where it meets the sink unit. The same story can be said for the exposed ceiling areas, where there’s less dark shading between the beams. It appears that lowering the shadow settings removes some bonus shading before actually reducing the quality.

There’s a very slight drop in texture quality, but the overall picture is far too similar to the highest settings to grumble, especially if you need to improve your frame rate. Our PC rig was able to run at around 150 fps at high settings, which is a pretty great result. It’s somewhat marred by the pop-in issues that still persist, but it’s not a deal-breaker. 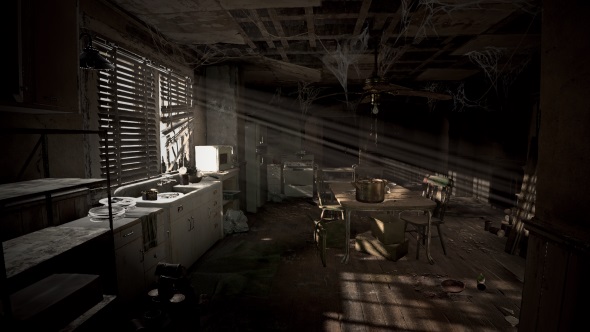 Instantly you’ll be able to see the difference between high and medium settings, which is due to the volumetric lighting being turned down to low. The lack of depth of field also makes the image look sharper which, while sounding like a benefit, is detrimental to the spooky, realistic effect. The scene is brighter and less eerie than the shadow-cloaked ones seen at high and ultra settings.

The resulting jump in frame rate is what we’d expect; the average was around 190 fps. The texture pop-in is partially relieved, too, although most likely due to not requiring to render the high-res textures that the highest settings demand. 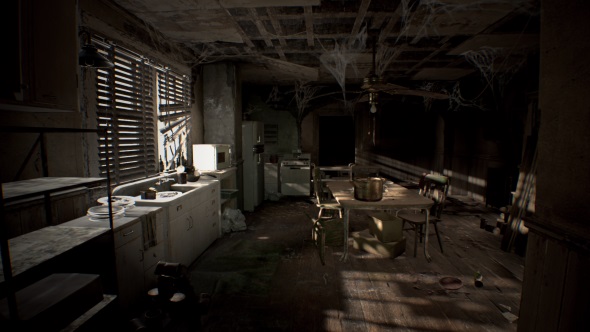 At first it may seem that the lowest settings, where literally every option is set to very low or off, looks better than medium. That’s because at very low the texture work is so smeared and blotchy that it almost mimics a depth-of-field effect. Resi 7 is seriously ugly on low settings, especially when you get your face close to things like doors and realise it’s just a flat piece of streaky brown, rather than woodgrain. For a game so reliant on generating atmosphere the complete lack of proper lighting, shadows, and reflections really damages the experience.

But, should you wish to play on a really aging rig, the options are there. If you’re using a PC similar to ours, turning everything down/off will result in a frame rate that soars beyond the 200 fps range. The texture pop-in is completely cured (thanks to having no texture to pop-in, haha) but a new issue does arise: crazy shadows. Generally they’re fine due to being static, but shadows around moving objects flash and flicker in a most odd way. This is very obvious when outside, thanks to the movement of trees, but is thankfully minimal when inside the house.

You can quickly see the difference in detail between ultra and low settings in this comparison of the Baker’s delightfully fresh fridge. At ultra the stringy goo still hangs between the door and frame, with fairly authentic grime coating the racks and trays. At lowest settings, everything looks pretty blotchy and pixelated, even if the actual physical fridge items still retain their shape well. 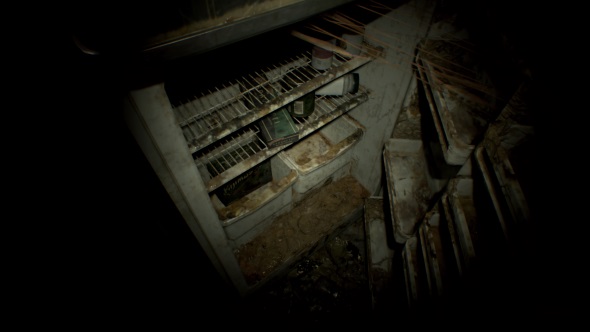 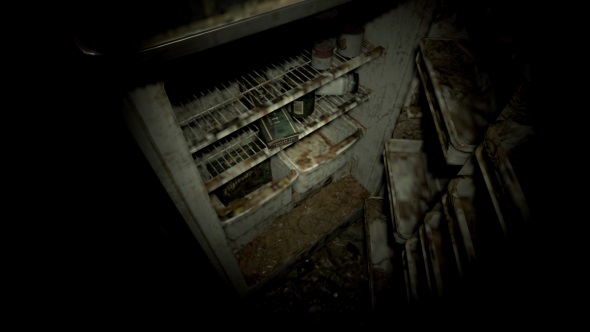 To see how Resident Evil 7 performs on different hardware, we have tested the game on four different graphics cards; two from Nvidia, and two from AMD. We’ve sampled the most popular cards from both the current and last generation of GPUs in order to offer the most useful information.

All four cards are tested with every texture option up as high as they’ll go, and with every graphical effect turned on. For the test we perform a live in-game benchmark with a 60-second duration, which comprises looking around, interacting with items, and combat. The same 60-second section is played three times to gain an average, and the process repeated on all four of the test GPUs.

There’s strong performance across the board, meaning Resi 7 runs really well on a solid variety of machine specs. Our top-tier testing card, the GTX 1060, is almost hitting 100 fps on average, and only drops to 69 fps when things get heavy. That’s a full nine frames above the gold standard.

Even if you’ve been unable to upgrade, there’s good performance from the previous gen. The GTX 970 is within touching distance of the 1060 at an average of 87 fps, and while the old AMD R9 380 only manages 47 fps, that’s very respectable performance from a GPU of that age and price.

You’ll no doubt want Resi running at its best, and that means hitting 60 fps while looking as beautiful (grisly?) as possible. If you thought such a standard was beyond you, there’s plenty of good news below. The highest settings are most certainly within reach for many users. 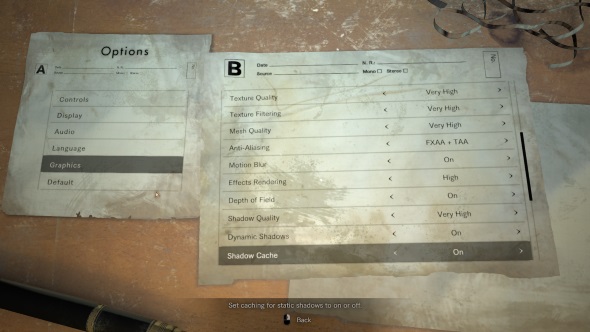 If you’re running one of Nvidia’s modern Pascal-powered cards you’re in for a great time. It’s not a question of hitting 60 fps, but a question of ‘how high can I go?’. For our test we turned everything up – literally every setting as high as they’ll go – and found that the average frame rate achieved was 92 fps. That’s a fantastic result, meaning you don’t have to have the most bleeding-edge, wallet-destroying hardware to run Resi 7 at its best.

If you’ve not yet made the jump to the 10 series and are still using a GTX 970, you’ve absolutely nothing to fear. Nvidia’s last-gen card maintains the pace set by its younger sibling, and there’s no need to do any tweaking. With everything set as high as it can go, the 970 ran at an average of 87 fps. No need to upgrade for your horror kicks this time. 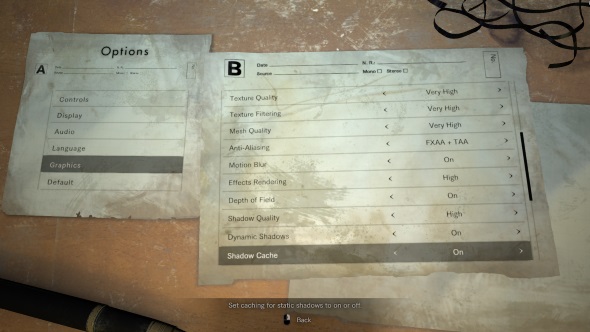 AMD’s popular RX 470 doesn’t struggle. While it can’t quite run Resi at full ultra settings without being a little choppy, reducing the shadow quality from very high down to high, and setting reflections to variable makes the world of difference. We’re talking double the performance; from 53 fps up to an incredible 116 fps.

If you’re using the previous generation of Radeon cards there’s no need to panic: it’s just as capable. The R9 380 performance is remarkably similar to that of the RX 470. Using the same settings used for that card (variable reflections and high shadows), AMD’s GPU puts out 102 fps.

Not that long ago it was rare for Japanese titles to find their way to PC. And when they finally did start coming this way, they were often terrible ports with less options than you have fingers on one hand. These days we can expect ports with far more dedication behind them, and Resident Evil 7 ranks among their number. While the highest settings don’t put it a marathon distance in front of the console equivalents, the overall effect is strong thanks to expert light and shadow work. Texture work could be better, and pop-in turns up a little too often, but Resi’s PC performance is strong. Just look at those frame rates; this is a smooth experience, especially if you’re running hardware from this generation.

It would have been nice to see some PC exclusive bonuses, but even without them this is a robust port. For anyone considering a purchase of Resident Evil 7, the PC should be your first port of call.