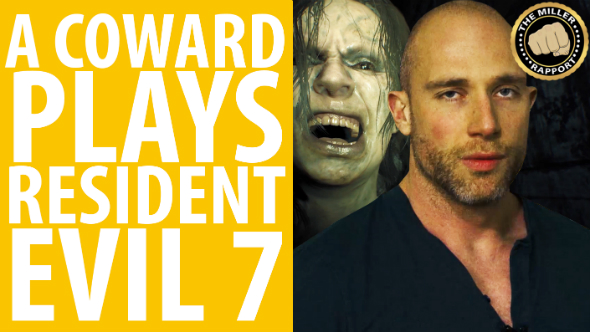 Simon Miller might have been raised in Trap City, USA, but it turns out that under all the talk of devouring chicken and broccoli 24/7 and punching dumbbells to death, he’s actually a great big wuss. This according to his latest episode of the Miller Rapport where he’s reduced to an uncomfortable wreck of nerves by a few bumps in the night and a crazy lady with a knife. Of course it’s no less than he deserves after all of his nerd-bashing and angry rants about the physique he thinks we all have.

Want to know how we got on with the latest Resi game? Check out our Resident Evil 7 PC review.

So what does it take to fell Miller and his bough-like arms of sturdy English oak? Apparently, a bit of dodgy CGI dental work, a rotting corpse that looks a bit like Tony Hawk and fending off a knife attack with your bare hands. We’ll give him that last one. Credit where credit is due though, he never stops making quips and insulting people even through gritted teeth while squirming in his seat. Ah, the magic of YouTube.