The private investigator is Booker. The woman is Elizabeth. The city is Rapture. But how, if at all, these three are related is initially, deliberately unclear. Burial at Sea knows its audience have come fresh from the revelations of Infinite, and canonically resets its protagonists, redefining them by their noir surroundings and apparently wiping their memories. Booker doesn’t know Elizabeth and, while she seems to have some understanding of who Booker is, she seems less familiar with Rapture than the private investigator she’s hired.

On top of this there’s the more basic mystery of a missing girl, vanished somewhere near the city’s docks, which not only drives the plot but should ring alarm bells for anybody who’s played the original BioShock, a game crammed full of abducted and indoctrinated, DNA-extracting horror-kids. This is the less grand and less quantum of the two puzzles, and so it’s ultimately the drip-feed of clues as to the identity and background of this new Elizabeth and this Rapture-settled Booker that will push you along the two or three hour long DLC.

Burial at Sea is set just before the messy New Year’s party of the first game, so Rapture itself is untouched by the ruin that preceded its appearance in the original BioShock. You witness it in its true colours and at the height of its opulence, wandering through a series of several large open areas populated by small crowds of well-dressed ladies and gents. Bars served by plasmid-enhanced teleporting waiters, Cohen’s glitzy theatre pavillion, music stores and galleries, all framed by brass and glass and ocean and fish.

Most NPCs, if not every last one of them, will spool off a few lines of dialogue to Booker or to one another as you approach, ruminating on just how excellent life is in Rapture, and what wonderful philosophies Andrew Ryan espouses. Some quietly voice their dissent, but all of them convey the flavour of the surroundings. In fact, almost the whole of the first half this DLC is spent combatlessly wandering the environment like this, absorbing information from chattering characters by standing near them. At one point you’re using Elizabeth to distract shop owners while you steal items, but otherwise it’s hard not to feel somewhat removed from Rapture, like a spectator to the unmoving and static spectacle of the city. 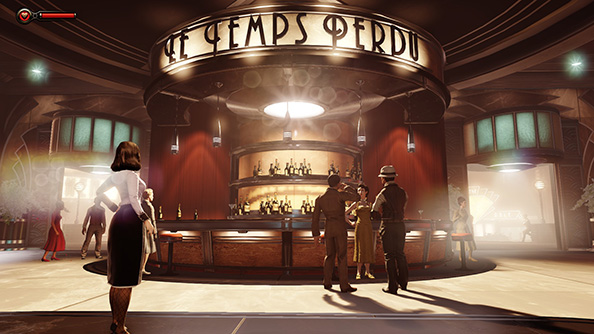 It was a problem Infinite had at times too, the feeling that you were in a world that you weren’t allowed to touch, but it’s exacerbated here by the unchanging pace, a conveyor belt of dialogue and scenery precision engineered to dazzle and amaze the eyes. This part of Burial at Sea is less a game and more a coffee table book, a gallery of beautiful submerged architecture and artfully composed surroundings. Whereas Infinite snapped you back into alertness by frequently cutting its narrative with combat sections, Burial at Sea instead confines them to two entirely different parts of the game. That is to say, a third of the way through the DLC you leave the building where you’re being fed a story and enter another one where men and women quite suddenly want to bash your face in with wrenches.

A large section of the game takes place in Fontaine’s sunken department store, which doubles now as a prison for him, his rebel fighters and a host of Rapturites driven man by plasmid abuse.This part of Rapture is the more familiar one, a wrecked and leaking bilge of bad lighting and electrocutable puddles. Fighting splicers does feel noticeably different to fighting the sane foot soldiers of Infinite. They quietly and obliviously patrol rather than stream madly out of doors, and so you can plan and time your attacks from a dark corner, stealthily knocking them out from behind or laying plasmid traps for them to stumble across.

Resources are extremely limited too, to the extent that you’ll have to clumsily melee your way out of certain situations or avoid combat entirely. The scarcity of ammunition and plasmid juice does lend the fighting a desperate and effective sense of survival horror however, one that takes some getting used to if you’ve just stepped off of Infinite’s gun-boat. The limited selection of plasmids and their alternate fires, as well as the inclusion of a new freezing plasmid, allows you to approach fights with strategy in mind. 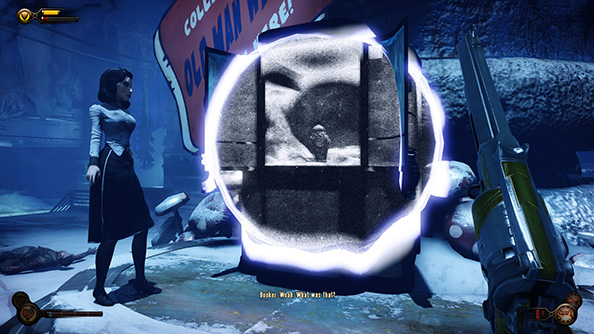 There are returning elements from Columbia. The Skyhook is back, introduced with a degree of “here’s your crowbar, Gordon” awareness perhaps a little self-indulgent for a game less than a year old. Plasmids also come in bottles now too, which is successfully retconned in an audio diary left behind by Suchong, inventor of the magic spell juice. Elizabeth helps you out in scraps too of course, chucking you health and Eve and coins and bullets occasionally, and later on assisting you by opening tears in the ol’ quantum fabric.

The objectives you pursue all too frequently come in batches, asking you collect three of a thing or activate five of a something, which necessitates some repetition and backtracking through areas that eventually tires you out. Splicers regenerate too, filling up rooms you’ve already cleared and chipping away at your precious ammo. Despite being just a few hours long, as the DLC draws to a close you’ll find yourself impatiently plodding towards your next goal in pursuit of more story breadcrumbs. Just as standing within earshot of spoken dialogue in safe Rapture outstayed its welcome, so too does the relentless splicer bashing of unsafe Rapture.

Burial at Sea has a real pacing problem, stemming from the very literal segregation of its narrative and combat sections. It makes you finish your meat before your can start on your vegetables, where the metaphorical meat is the talking and the vegetables are the shooting. As a digested mush in your tummy, Burial at Sea is a beautiful brown ride through gaming’s most iconic city and a compelling return of two remixed and much loved characters. On the plate however, its two very different games struggling to find a common ground, and both doing themselves a disservice as they try.