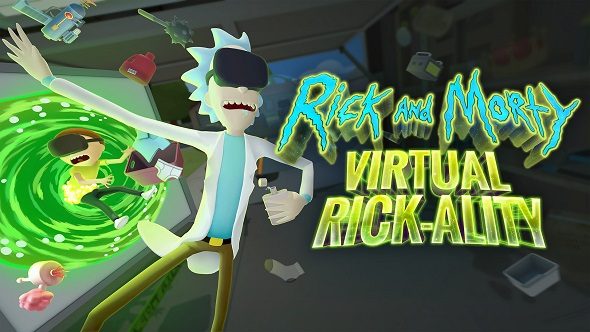 ﻿Update April 21, 2017: Rick and Morty’s VR adventure is out now, and has got a very meta launch trailer to celebrate.

Explore more virtual worlds with our list of the PC’s best VR games.

In the game, you’ll play as a clone of Morty, ‘helping’ gravel-voiced (and barmy) scientist Rick with his experiments, being abused for your trouble, and jumping through portals into alien worlds. “Also, it’s got this thing!” say developers Owlchemy Labs, in a frankly reckless statement of confidence.

﻿Original story April 16, 2017:In a partnership between Adult Swim Games and Job Simulator developer Owlchemy Labs, the VR experience Rick and Morty: Virtual Rick-ality is coming to Steam next Thursday. Putting players behind the eyes of a clone of interdimensional traveller and whiny teenager Morty Smith, Virtual Rick-ality allows you to explore the Smith household, interact with items from the show and even punch Rick in the face.

Your time in Virtual Rick-ality will mostly involve you getting yelled at by the mad scientist to complete various tasks. These range from basic puzzle solving to shooting down hordes of bugmen while on a space trip. Much like the show, don’t expect any logical progression from task to task as Rick hops from one random thought to the other. You’ll also bump into other characters from the show like the Meeseeks as you fulfil Rick’s demands.

Virtual Rick-ality is fully voiced, with the original voice cast providing their dulcet tones for this VR Rick and Morty experience. The Steam page even promises that you’ll “question your own self-worth” as a 3D version of Rick lambasts you for your insolence. That’s a great selling point, I guess?

Previously announced just for the HTC Vive, Virtual Rick-ality will be also available for the Oculus Rift when it releases on April 20. The Steam page has also been updated with the game’s minimum specs, so check to see if your computer can run this madcap adventure:

With the third season of Rick and Morty having its opening back on April Fools’, it would be fair to expect that there may be some hints to the upcoming season hidden within Virtual Rick-ality. You may even be able to find that magic McNugget sauce if you look hard enough.