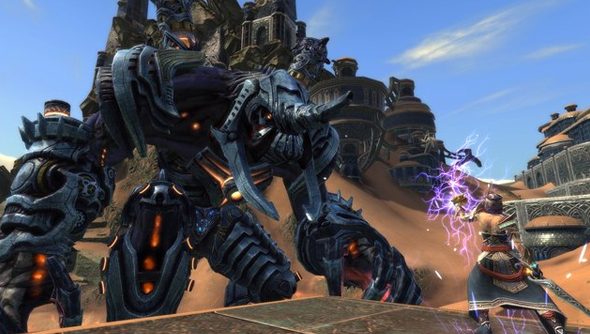 The coming Rift expansion, Storm Legion, will triple the size of the original game, bringing two new continents in which players can explore, build, and battle. The new developer diary out from Trion Worlds – whilst conventionally hyperbolic – is pretty compelling when it comes to the scale of the project and the possibilities it opens up for the developers.

It’s interesting to see the developers talking of the expansion in terms of creating clearer areas from which to build, breathing room almost. Though, with 10 major patches between the games release and the coming expansion that original continent must be feeling pretty packed full of content by this point.

Scheduled for a September 19th release date (eep, hope their audience doesn’t overlap massively with the Jet Set Radio fans, else there are going to be some emotionally torn gamers on that dualrelease day), the expansion will bring with it a raising of the level cap, customisable parts of the world, and a new soul for each of the calling.