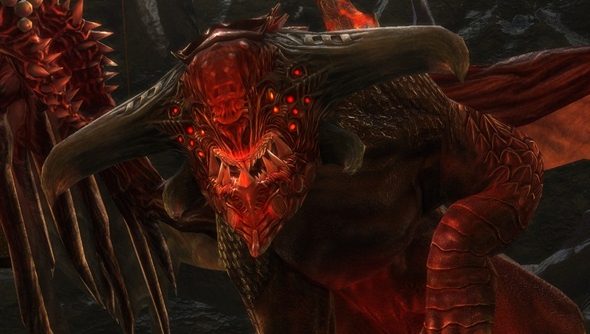 It’s been a bit over a year since Rift launched, a year during which Trion have been tirelessly working to improve on it. With patch 1.8 recently released and with 1.9 moving ever closer, it’s a good time as any to take a closer look and see where the game currently stands.

A year ago Rift surprised a lot of people – including yours truly – simply by virtue of feeling complete. It had a smooth launch, with stable servers. Many of us marveled at the craftsmanship that had gone into creating it. The cracks in the facade came mainly from not bringing that much innovation to the table, except for the dynamics of the rift-system from which the game gets its name, and the (now traditional) lack of much to do at end-game. I personally left before I even got that far, mostly because my MMO-fixation means I bounce around a lot between games. Sorry about that, Trion.

Fast forward a year, and Rift’s end-game has seen tremendous improvement. During this time, the developers have released eight major content patches adding new raids, zones and systems on top of the quality product they already had. No matter whatyou think about the game itself, you still have to confess that it’s an impressive feat. If you nowreach level 50, you’ll have a long list of activities to busy yourself with outside of raiding – including the Emerald Isle, a major overland zone that was added in patch 1.6. Patch 1.8 introduced two new professions, including fishing, and 1.9 will be introducing three faction warfare within the Conquest battlefield.

The brilliance of Rift’s endgame is that its rewards are spread out over different activities and, more importantly, over the whole world of Telara. You won’t be able to claim the best gear in the game simply by raiding, you’ll also need to take part in world events and instant adventures to grab the tokens needed to buy the so called planar essences that bolster your stats. While other games puts all of the best stuff deep inside raiding dungeons, hiding many of the endgame players away from the rest of the world, Rift has scattered them all over, creating a more vibrant community that often meet up to fight powerful demons or dragons. It’s quite a sight seeing 60 level 50 players taking down some giant monster on the beaches of the Emerald Isle.

While the rifts and invasions might not have been as dynamic as Trion suggested, especially after they were nerfed at the end of the beta,they still add a lot to the experience. There’s simply something happening in Rift all the time. Instead of being only a static world where the same monsters stand around in the same places year after year. It became obvious to me while playing Tera the other week, where I often got frustrated by NPCs who stood around poking their noses despite the fact that I had dragged some gigantic beast straight into their camp. When I log into Rift I simply don’t know exactly what is going to happen that night (unless my guild is raiding, of course). It keeps it fresh.

Rift is far from perfect. It’s still filled with many MMO cliches that we could live without, even if it’s slowly been trying to at least polish some of them up and make them shine a bit more. There’s still the issue of repetition, and sooner or later you will burn out on it just like you will most MMOs. It will only take a bit longer here, and hopefully Trions’ update schedule will keep you happy on the way. There’s also the issue of some servers suffering from low population, but with free server transfers available at the drop of a hat the players at least won’t have to suffer from that.
Beyond 1.9, who knows what will happen? But if you left around the same time I did and have been thinking about giving it another look, I can recommend it. If you’re looking for a MMO to try, you can’t go wrong with Rift. It’s been one hell of a year for Trion and hopefully they can keep up the pace.

Rift now has an extended ten left trial, called Rift Lite. You should take a look.