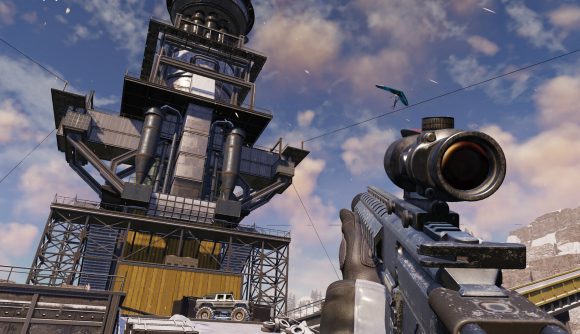 It once looked as though Ring of Elysium might hold on to a reasonably-sized chunk of the hotly contested battle royale genre, but according to SteamCharts, since it hit a peak player count in December, its peak and average player numbers have decreased. However, the game, which has now released out of early access, appears to be doing pretty well in terms of downloads. Studio Aurora has just announced that, according to SteamSpy, the game has now surpassed seven million downloads.

In a press release, the studio says that, according to the sales estimation website SteamSpy, it’s passed the seven million downloads milestone, having just fully released out of Early Access in June. The game is currently also featuring in an online esports tournament – the Amazon Cup, which has a prize pool of $60,000 and is open to “all players for the North America (NA) and European (EU) regions”, according its website. The regional championships will take place on August 10 (EU) and 11 (NA).

This downloads milestone is interesting given the game’s player numbers since its launch. Most games hit their peak player counts just after they release, but battle royales tend to swell, propelled by streamers and regular updates. Ring of Elysium was no different: it released in September last year, but only hit its peak population of 63,435 in December. This was followed by a modest 8% dip in January, since when peak populations have fallen off a cliff.

Apex Legends likely had something to do with this. The steepest dive in Ring of Elysium’s peak players – a shocking 45% drop – came in February, a month that began with Apex Legends’ launch. Genre leaders PUBG and Fortnite are very different experiences, and it’s easy to see why Apex Legends has succeeded in soaking up players looking for something in the middle. It’s also easy to speculate that it has come at the expense of similarly paced games such as Ring of Elysium.

With all that said, it’s too soon to call time on Tencent’s battle royale – especially given this new downloads figure.

Related: check out the best battle royale games on PC

Perhaps Apex Legends has established itself as the third major battle royale, and the last few players who were ever likely to get into the genre have found their home. We’ve already lost The Culling. Perhaps this is start of the oft-predicted consolidation in the battle royale genre. It’ll be interesting to see how Tencent respond, and whether the number of downloads will continue to climb.

If you’re keen to compete in the Ring of Elysium Amazon Cup, you’ve got until August 6 to sign up, when the final qualifying week kicks off.