It seems that Donald Mustard, Epic Games’ worldwide creative director, is a VR believer. Despite opinions to the contrary, he reckons the technology hasn’t yet seen the hardware proposition that’ll really set it on fire.

If you’re also a convert, check out the best VR games on PC.

Mustard began his discussion with us on the current state of VR with reference to Epic’s recent Robo Recall – a VR shooter in which you execute a (violent, bullet-based) recall of many haywire robots. I’ve played it, and it’s pretty great, but Mustard reckons it’s about the best VR experience going:

“We just released a game called Robo Recall, a VR title we released exclusively with Oculus. Our goal with Robo Recall was ‘Can we make a game that really, really shows the absolute bleeding edge of what VR can do? Can we make literally the best VR experience ever made by human beings?’ And we have. It’s pretty amazing.” 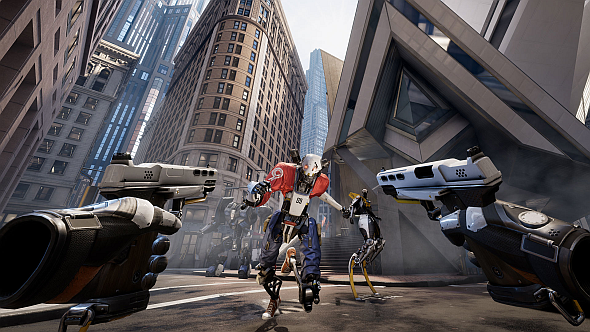 But that’s nothing on what Mustard thinks is coming next, comparing VR now to MP3 players before the iPod:

“I think that’s the stage we are at with VR right now. There were these little devices that could hold not even a CD’s worth, like ten songs, and people were like ‘This is amazing! I can put ten songs on this thing and get on my flight and listen to the same songs over and over again.’ But you saw the potential future of what that could be, right? That’s where we’re at with VR.”

The iPod smashed all other MP3 players by having a larger hard drive, a smooth user experience, better marketing, and slicker presentation. Do you think VR needs something similar to really take off?