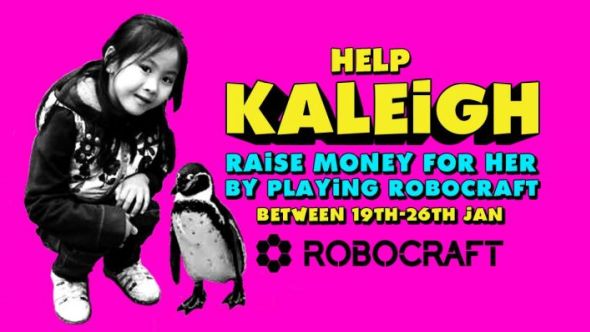 Every so often, Robocraft’s developers hold fundraising events for worthy causes. Charities helped in the past include AbleGamers, Oxfam and Doctors Without Borders, but this time, there’s a personal angle.

Kaleigh is a young girl, and a friend to Freejam. She also suffers from diffuse intrinsic pontine glioma, or DIPG – a highly aggressive and difficult-to-treat form of brain cancer. Worse, it typically occurs in children. Although it’s rare, with only around 40 diagnoses in the UK each year, it’s highly life-threatening, with half of all patients passing away in the first nine months.

Kaleigh’s family are raising £200,000 to raise awareness of DIPG and fund convection-enhanced delivery (CED) therapy, a groundbreaking treatment that should improve her quality of life.

Here’s how Freejam are helping out: for the next week starting today, every match completed by Robocraft players will contribute 4p toward the appeal. Freejam are hoping to raise at least £10,000 over the next week – this works out to around 250,000 matches.

Of all the ways to help a good cause, this has to be one of the more appealing. Robocraft is pretty fun; it’s a free-to-play multiplayer game, in which you build your own battle robot from a huge number of lego-like blocks and modules, then take to the arena to blow up everyone else’s. There’s loads of ways to optimise your design for competitive players, while daft and expressive builds are also possible if you’re more creative.

If you’d like to play a good game and help treat a young girl’s cancer while doing so, check out Robocraft on Steam. For more information on Freejam’s appeal, click here, or on DIPG, click here.

If you’d like to help in other ways, you can donate directly to Kaleigh’s trustorsign a petition to the British government to increase DIPG funding.